Grand Spinn welcomes you back to the roaring twenties, where everything is glamorous, luxurious and a little bit simpler.

NetEnt wanted to go back to a simpler time, so they created a slot that felt like it was made a hundred years ago. Grand Spinn has an expensive hand-made feel to it like it was not a slot you would play in a dingy nightclub but in a grand hotel.

Grand Spinn was released in 2019 and it is a three-reel single-lined slot with barely any special features. The game is deeper than it appears at first glance and that is perhaps the main draw. NetEnt has released a second version of the slot, called Grand Spinn Superpot. That version features a set of progressive jackpots instead of fixed pots.

The game opens up with some classy smooth jazz and a relaxed atmosphere. This is not a hectic game, where you are pushed to make rash decisions. Here, you get all the time in the world, as you sit at the machine and play at your own leisurely pace.

The red and gold colour scheme just screams luxury. Everything here is designed with opulence and wealth in mind. Heck, even the spin button is a ruby with gold arrows. But unlike, say Piggy Riches, this one doesn’t flaunt its money.

I like what NetEnt did with this slot, especially with the feel and atmosphere of it. The slot isn’t in any rush and you can just enjoy the relaxed mood and lounge about. You could just let the game sit in the background and listen to the music and you feel like no one would mind.

All the symbols radiate that same kind of luxury as their surroundings. The style is taken from the fruit machines of old, but every symbol has that little extra added. The fruit symbols are not just plain fruit but are brought on an increasingly ostentatious platter.

There are three special symbols in the game, an arrow symbol that only works in the Nudge feature, a multiplier wild and the jackpot symbol featuring one of the three possible jackpots. Just like in the older slots, Grand Spinn also has an empty space that has no use.

All the symbols require that you get three of them on the payline. Below you can see the wins when played with a wager of 2 coins.

When I first looked at the pay structure, it looked pretty disappointing to me. But even though this slot only has a single payline, you can get multiple hits with one spin. The Nudge feature can manipulate the reels in a way that you win even up to 20 or 30 times. That one coin win just turned a whole lot bigger.

When I started to play Grand Spinn, I was suspicious of the high volatility. I mean, a slot like this can’t be more than a medium. Then I saw the Nudge feature activate and I was instantly convinced.

When you win anything, the reels start to nudge and give you even more winning combinations. The game starts with the first reel and nudges it one square at a time for as long as there are more of the same symbol above it. When the first reel is done, the slot moves to the second and then to the third reel.

If there is an arrow symbol on the reel, the slot will nudge to that and then go all the way back and start nudging the same reel over again. The arrow is then replaced by an empty space, so it will not loop forever.

Grand Spinn has three different jackpots all ready for you to win. Just get three of the same jackpot symbol on the payline and it is yours. The jackpots in the regular version of the slot are in order, 40x, 200x and 10,000x your wager.

In the Superpot version of Grand Spinn, these jackpots are all progressive. This can be either a good or a bad thing depending on how much the slot sees play on that particular casino.

You can also win the jackpot during the Nudge feature. After all the reels have been nudged, if there is a jackpot symbol on top of each of the reels, you win. They don’t even need to be the same jackpot symbol, but you will always win the lowest pot that is visible on the symbols.

I like games that dare to be different. Grand Spinn is one such game. It may not be my top choice, but when I’m in the mood for something simple and relaxing, this is a good option.

I was pleasantly surprised when I first tried this slot. It looked too simple and boring to be any good. Then I started to play, and I noticed how intriguing and rewarding the Nudge mechanic can be. The game had a lot more to offer than I had anticipated.

I can easily see that some people will not like this. NetEnt took a calculated risk when they released a fruit machine with a single payline and barely any special features in 2019. It was a bold move, and I say it was worth it. Grand Spinn may not be a grand slam, but it is nowhere close to a foul ball.

Browse casinos with Grand Spinn and other slots from NetEnt. Create an account and try the game for free before making a deposit.

You can play Grand Spinn in English, Finnish, Swedish, German and 20 other languages. 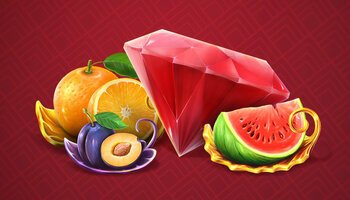