Grand Wheel takes us to the classic gambling hall and puts us in front of a slot machine that uses all the traits we expect from our old-school slots. To add some spice, Grand Wheel also features a grand wheel that lets players multiply their bets.

This Red Tiger slot was released in 2017 and made to look a lot like fruit machines that many players will remember from the old days. The game features only 1 payline, with a 3-reel and 1-row playing field. The symbols it uses are also familiar, with the usual fruits as well as bells and 7s. Players who enjoy something with a lot of feeling or a specific theme will not find it here, as the game features almost no background whatsoever.

The game looks fine for what it wants to do, which is to resemble the classic slot machine. The symbols are big and colourful, and when a special Wheel Bonus symbol appears on the screen it shows a brief animation as well as slowing down the remaining reels. Getting a win will have the symbols on the win line flash just like they used to do.

If you’re expecting the sound-design to perfectly resemble the classic fruit machines you’d also be right, with the standard bleeps and bloops that we associate with these games. There are some electric jingles when you hit a win, and the Grand Wheel feature is also celebrated with rather excessive party music. Overall, the music is fine but didn’t do anything special.

The game has a small selection of symbols. In combination with only 1 payline, the game averages out to a Low Volatility. I wouldn’t really agree, I found wins to be rather spaced out, with the wins I did get to be rather high. All in all, picking a lower bet between £0.10 and £100 is probably still advisable.

The symbols are all that you’d expect with only the Wheel Bonus symbol looking a little more original. That is also the only one that is animated in any way beyond flashing when it’s on the win line.

The game doesn’t offer a lot of features. In fact, there is only 1 feature to speak of but it can be divided into two parts:

The game itself plays like a normal fruit machine, with a single payline. The issue here is that most of the time, the 3 reels won’t perfectly aline with the bet line and thus not count as a win. I found that to be the biggest hurdle when it came to triggering wins. I don’t really consider that a fun part of slots, which is one of the reasons fruit machines generally don’t hold my interest very long.

There are no Wilds or other special symbols in the game. The Wheel Bonus symbol can be considered a Scatter since just 1 on any reel will trigger the special feature.

Once you get the Wheel Bonus on the screen once or twice, they each spin in turn. The multipliers on the wheels are rather small but they are awarded instantly. The wins were generally somewhere between the highest and lowest number, and it won’t break the bank but it’s an instant coin win we can’t say no to!

The bigger Grand Wheel requires 3 Wheel Bonus symbols on the payline. Then, the game pans up to reveal the wheel above the reels. The Grand Wheel has bigger multipliers on them, with the smallest being 8x your bet and the largest 1,000x, which is also the max bet.

I thought the wheel takes a really long time to spin and come to a halt, and there’s no way to click through it and skip to the multiplier. Instead, you will have to sit and wait for it to come to a halt on its own. When it does, the multiplier it lands on is immediately awarded and the game returns to the base game.

I found the Grand Wheel to trigger more often than I would have expected but considering the odds, it was weird that I never hit a multiplier above 88x my bet.

Grand Wheel is a pretty standard video fruit machine that does its best to stay close to the original experience. The graphics, symbols and music will all remind players of the real thing. The Grand Wheel feature is the only piece of originality and even that’s not saying much. Still, I found it to trigger often enough to be interesting and in my experience, my funds trended upwards as long as I didn’t bet too high. Players can choose a bet between £0.10 and £100 to help with that.

If you take a glance at the screenshot you’ll already know if you’ll like this slot or not. It either delivers exactly what you’re looking for or none of it.

Browse casinos with Grand Wheel and other slots from Red Tiger. Create an account and try the game for free before making a deposit.

You can play Grand Wheel in English, Finnish, Swedish, German and 18 other languages. 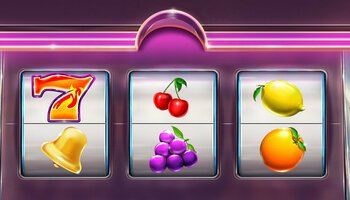