It makes perfect sense that a slot game set in a Chinese royal garden is called Great 88. The number 88 is considered to be auspicious in Chinese culture, and it rhymes with the word 'great'. But is the game so great in order to be deserving of this title?

I played several dozen spins on Great 88 and then I went for a few dozen more. I wasn't chasing the theoretical max payout of 8,888x bet but that number surely had a say in my decision to stay on the game longer than I originally intended.

The graphics on Great 88 may appear to be "two thousand and late" but I think that the game packs enough firepower to make you want to look beyond the visuals.

That which I like in particular about the gameplay is the surprise factor. Great 88 is all about the mystery prizes. There is also something called Firecracker Wilds and there is a standard Wild symbol that has an order of bombastic prizes.

I think it helps the game that it has 25 paylines instead of fewer. This makes for a more tightly-knit span of win outcomes as it is possible to land one or more payline wins from a single spin.

Clearly, the graphic design breathes symbols and iconography that can be found in the culture of ancient China. The background is filled with lanterns that line a set of stairs which lead to a building of a ceremonial kind.

The symbols on the reel set are a somewhat typical assortment of Chinese calligraphy, bamboo sticks, dragons, lucky knots and a jade frog. Some of the visual effects seem kind of cool - especially the firecrackers, but it all gets drowned out by an extremely cheesy soundtrack.

As I said earlier, the game's X-factor is the element of surprise and this is mostly found in the features.

Land three red boxes anywhere on the screen to get one of out five potential prizes. These include a number of high-paying symbols, small-sized instant wins, a random number of Firecracker Wilds, free spins or a turn on the bonus Wheel.

These are the two dragons that are high-up on the paytable. Great 88 can place between one and few dragons of the same kind, which can interact with those that are already present on the reel set, along with any available wilds.

The red boxes can hold up to three bronze coins that are counted on aggregate to the effect of providing you with an instant win between 3x and 15x your bet.

This one is simple, any of the red boxes can hold this sort of a wild symbol. Their speciality is creating ruckus and spreading their wildfire to adjacent symbols, turning them wild.

This is another totally randomized outcome, which keeps things fun and unpredictable. You can win between three and 25 free spins. Sadly, the free spins round excludes the Lucky Box symbol.

This is the most desirable outcome of the game. Each Lucky Box can conceal a golden Sycee and each of these awards one spin on the wheel. There are six potential outcomes on it: eight free spins, winning outcomes of 5x, 10 and 20x your stake, and a spin on the Mega Win wheel. Since the last field occupies the thinnest portion on the wheel, the odds of getting it are quite slim.

The potential payouts in respect to each winning combination are expressed as credits. If you change your bet, the values on the paytable will change according to it. Coin values range between 1p and 10p per payline.

Regardless of the bet amount, one thing is clear -- the low paying symbols don't return your full bet even if you land five of the same kind on a payline. Precisely, five bamboo sticks amount to 0.83x your bet.

Things begin to improve in the middle tier where two out of the three symbols can pay more than your bet if you land four symbols of the same kind.

Thankfully, there are five symbols in the high-paying category and this creates room for some kinder probabilities to post on the reels. I consider the Wild symbol as a part of this order. In fact, the Wild is the highest-paying symbol of the game.

Great 88 is perfectly balanced between the frequency of landing three Lucky Boxes and the small-ish payouts that exist on the better half of the paytable. The part of the game mechanic that I think saves it from oblivion is its tendency to post winning outcomes on more than one payline. This can make even the petty values bulk up in size and help your balance last until the next eventual feature.

I think Great 88 has few good moments, like the spreading Firecracker Wilds, but overall, I don’t think I can find a good reason to play this game again.

Browse casinos with Great 88 and other slots from Betsoft. Create an account and try the game for free before making a deposit.

You can play Great 88 in English, Finnish, Swedish, German and 21 other languages. 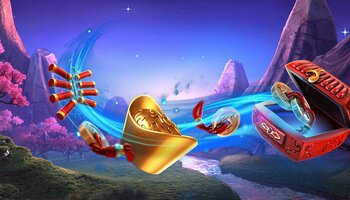