Greedy Goblins is home to a number of mischievous green critters that spend their days stealing, looting and generally causing problems. The game also features free spins, stacked wilds and a progressive jackpot for the players that want to watch.

This game is one of the older Betsoft games, released in 2012 but still active today and considered a favourite by many players. The slot features a standard 5-reel, 3-row playing field with a total of 30 win lines. While the 3D graphics have become somewhat outdated, there are a bunch of animations that make up for it as they keep the slot feel alive. There are also several bonus screens included with their own sets of animations.

There isn’t a background that places the game but when the bonus game is activated we can see that the goblins are burglarizing one of the gnome houses. Meanwhile, the different symbols also do a lot in setting the mood with different locations, other characters and Wanted posters.

When it comes to the sound, the developers also made sure to incorporate it into the setting. There isn’t a lot of music during the base game, instead playing mechanical sounding reels spinning. When there’s a win it plays a brief medieval jingle. It’s not as much as they could have added, but it doesn’t break the mood either.

Greedy Goblins has a reasonable number of different symbols that often don’t all appear on the screen. There are some features in the game that can help in creating a win but these are quite rare, meaning that the player is usually depending on natural wins. This causes the slot to get listed as High Volatility, which fit my experience. As I played the game, I found my funds to drop slowly but consistently, with only occasional big wins to compensate.

The payouts are generally rather low, giving players little even with five-of-a-kind wins. The game relies heavily on the occurrence of multiple wins at the same time, or one of the special features to activate.

Greedy Goblins uses many different features to change up the gameplay. I didn’t think any of these were particularly original but the bonus game is done well and offers some extra animations and a special screen.

There is also the Gold Coin feature, where the gold coin symbols appear and cause the reels to cascade. This makes room for new symbols that can grant the player additional wins. These gold coins are counted together even if they appear on separate spins, as long as it’s in the same sequence.

The Elf symbols are the highest-paying symbol in the game but it also allows players to win the progressive jackpot. Any bet other than the highest will grant the player a max. win of 400x your bet. Getting five-of-a-kind on the screen while the maximum bet is enabled, the jackpot can be up to 1,200,000x your bet. This is not guaranteed of course, since its progressive nature means that the jackpot will be reduced whenever it’s won.

Finally, there is a bonus game that sees 2 goblins breaking into a gnome’s house and deciding what to steal. The player gets to pick these spots, each of them awarding a coin win until the Collect location is chosen. After that, the player receives the total coins earned.

Greedy Goblins is a good slot even though it’s quite old, with the graphics being detailed and intricate even when the effects aren’t quite as beautiful as some slots have now. Still, they do a great job at setting the mood and giving players the sense they’re in a magical forest following these goblins.

The progressive jackpot can be absolutely massive when it appears at the right time but players will have to pick the highest possible bet between £0.60 and £150 per spin. This can obviously be extremely punishing considering the high volatility and only the biggest power players should ever consider it.

The game offers a great experience for anyone, from players that enjoy a number of different features to those that simply like to look at different animations in a fantasy setting.

Browse casinos with Greedy Goblins and other slots from Betsoft. Create an account and try the game for free before making a deposit.

You can play Greedy Goblins in English, Finnish, Swedish, German and 22 other languages. 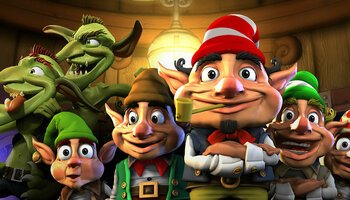