Greek Gods from Pragmatic Play joins the ranks of other mythological titles such as Gods of Olympus, Age of Gods and Divine Fortune Megaways.

So, will Greek Gods rise majestically above mount Olympus or sink way below Poseidon’s little toe? Let’s peak beneath Hermes’s sash and find out.

A Mood of Mythology and Madness

Greek Gods - dramatic name - and dramatic typography to match. Here’s a slot that you’d play if you’re hard up to find some mythological Greek slot action and played through every possible title. While shopping for a Greek mythological slot, it probably won’t be the first off the shelf.

The game’s title is a great example of the development team being overly generous with pluralisation. At the last count, this slot only features a singular god, the big man himself, Zeus. The god of the sky is joined on the reels by his consort, Hera.

Here, Zeus kind of looks like an electrified Santa Claus with illusions of grandeur. You might not want to lock glances with this mains-charged Father Christmas for too long. Hera is portrayed as a bit of a siren type that you probably wouldn’t trust with your significant other; all pouty crimson lip gloss and overly-plucked brows. She also seems to be chucking you a glance that could end in either seduction or possibly a swift headbutt, her motives seemingly ambiguous.

Other symbols, such as the Lyre looks like it was bought at a garage sale for Irish-themed slots and shoehorned into Greek Gods. Additional symbols include the royals, sporting a colour palette of glaring neons that wouldn’t look out of place on an ‘80s game show.

Greek Gods isn’t an ugly slot by any means. Here’s a slot where there could have been more time and energy spent on finding an overall graphic theme, building a better relationship between colours and characters. Oh, and maybe chuck in an extra god, just for good measure.

Not especially feature-rich, being pretty stingy on the extras, Greek Gods weighs in as a light-weight for features:

If you like your slots stripped back and minimal, then Greek Gods is perfect for you. Is this a case of less is more or less is, actually, less? This depends on what kind of player you are and what you expect from a slot. Horses for courses, as they say.

Click autoplay to spin between 10 and 100 spins without lifting a finger. Turbo play is available for the less than slightly patient among us.

A medium volatility slot with an RTP of 96.5%, the maximum possible win clocks in at 4,320x. The minimum bet stands at £0.20 and maxes out at £125. The juiciest wins are brought to you by Zeus and Hera with 6x and 5x respectively for five on any of the 243 paylines.

On Bojoko, we’ll be taking a look at graphics, what features are popping and the bets and payouts in Greek Gods. We play through countless games so players can make an informed choice before laying their pennies on the line.

There’s nothing that bad about Greek Gods, but also, it’s not going to win any iGaming awards for Slot of the Century. If you’re a player that wants a stripped-back version of a slot, it could appeal.

I mean, it could be worse. It could be a lot worse. That’s not to say that Greek Gods is particularly good, either. I wasn’t a fan of the in-game visuals one bit, aside from some nifty animation stings here and there. The rest of the game left me feeling a bit cold.

The Gameplay is lacking in innovation but this isn’t the most heinous crime known to humanity. If a slot is missing something, such as engaging gameplay, it tends to make up for shortfallings in other areas. Greek Gods, unfortunately doesn’t do this and instead feels a bit like an empty conch shell washed up on a Grecian beach.

Attention spans are shortening at a pace quicker than you can reach for your phone. Greek Gods is a slot where it’s more about what’s on the reels and less feature-focussed. Greek Gods is an average slot, for average players. Just don’t expect anything other than an average gaming experience.

Browse casinos with Greek Gods™ and other slots from Pragmatic Play. Create an account and try the game for free before making a deposit.

You can play Greek Gods™ in English, Finnish, Swedish, German and 18 other languages. 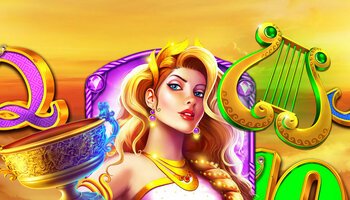