Mariachis are playing and everyone is preparing for the Day of the Dead. The thing is, that we are the ones remembered.

Play’n GO’s Grim Muerto is a game set around the Mexican holiday Day of the Dead. The slot is decorated with bright flowers, sugar skulls and candles to remember the deceased. The sombre, yet festive day keeps all of the dead from being forgotten and lost.

Grim Muerto was an instant hit. It was released in the summer of 2016 and has always stayed in the category of the most played games. People seem to love the theme and the features, and I am one of them.

So grab your guitar, join the party and see if this five-reel, 20 payline, high-volatility slot with an RTP of 96.51% is up your alley or something that you should forget.

Grim Muerto is a beautiful slot. The theme is well-utilised in both the visuals and the features. I just loved the colourful flowers and sugar skulls that hang from the top of the screen. The game is just a treat.

The Day of the Dead has been a popular theme lately in all media. Coco and Book of Life got a good response in the theatres and Thunderkick’s Esqueleto Explosivo slot even got a sequel. And I just have to mention the classic video game that immediately came to mind when I started playing this, Grim Fandango.

The sound effects and the fanfares all sound great. They are festive and I really felt like I did something right when the music kicks in. The only thing I would have changed is that the background music could be more pronounced. I know that the quiet music is a good contrast to everything else, but it sounded like a good song that I wanted to hear.

The game has two sets of symbols, the low-paying card symbols and the high-paying mariachis. Even if the card symbols have nothing to do with the theme, they are at least done beautifully. The skeleton mariachis look gorgeous and the small movements really bring them to life, no pun intended.

The reels also have a few special symbols that give helpful bonuses. The golden guitar of Marco Siniestro is a wild, that will replace other symbols. The Book of the Dead is a scatter that can activate the Free Spin feature. During those spins only, there is also the memorial candle, which can give you even more free spins.

The pay structure is surprisingly balanced for a high-volatility slot. It isn’t that difficult to get your wager back or even get a decent win in the main game. This isn’t as high-risk, high-reward type of a game as some others, which is just fine for me. The game can still surprise you, especially during the free spins.

What I most liked about the special features in this slot, is that they actually activate. In some games, you just can’t get some of the features to activate no matter how hard you try. Here, I don’t feel like that is a problem.

The Book of the Dead is the scatter symbol that can activate the Free Spin feature. Get three of them anywhere on the reels and you get 10 free spins. At the start of the free spins, one of the mariachis is randomly chosen to be an extra wild.

During the free spins, Marco Siniestra is even more attentive to what is going on. At the start of each spin, he will light up between two and five reels.

A new symbol is also added, the memorial candle. Each candle you get will give you three extra spins. Getting three of them at once will re-trigger the entire Free Spin feature.

Get three Book of the Dead scatter symbols and you activate the free spin feature. That’s all fine and good, but what if you just barely miss that? That is what Second Chance is for. If you get only two scatters, you have an extra chance to catch that final scatter. The four mariachis will line up and you get to pick one. One will hide a scatter symbol behind his back, two will have cash and one will have nothing.

I love Grim Muerto. The theme is a big draw, but it’s not the only great thing about it. This slot goes beyond my normal comfort zone and I still enjoy playing it every once in a while.

Normally I don’t go for games that have higher volatility. I like to play more calculative and don’t like to go for games with a very high risk. This time though, I enjoyed it quite a bit. Grim Muerto has enough special features that activate often, that it doesn’t feel like a high-volatility game.

Play’n GO did a great job with this game. It has made my personal top list and is in the rotation when I look for older games that I love to play. If you need a colourful pick-me-up or are just looking for a fun slot to play, then this is a game worth checking out.

Browse casinos with Grim Muerto and other slots from Play'n GO. Create an account and try the game for free before making a deposit.

You can play Grim Muerto in English, Finnish, Swedish, German and 30 other languages. 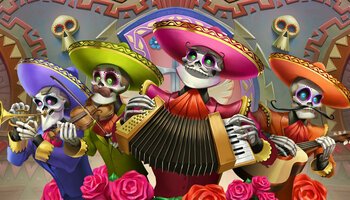