Guardian of Athens puts the player into the shoes of Athena, protector of the city in ancient Greece. The game immerses us in some excellent visuals while offering interesting features such as free spins and multiplier wilds.

This slot was developed in 2021 by Quickspin, who seemed to have taken a break from the Eastern-themed slots to look more towards Europe. The game looks excellent, with a cloud-filled background that shows golden statues of Athena sticking out. This gives an immediate legendary quality to the setting. The 5-reel, 3-row playing field is filled with various symbols that remind us of this ancient culture.

Players can try and get a win on 1 of the 20 paylines that the slot has. This will trigger a brief animation where the total coin win is shown as well as the winning symbols are brightened. The creators have clearly put a lot of time into designing the game as everything looks crisp and detailed. The style is pretty realistic without being distracting. It’s nice to see various items like they’re new, in contrast to the way we usually see them in the museum.

As far as the sound design goes, the developer has decided to keep things rather toned down and quiet. Players won’t really hear a lot of music during the base game. It really only consists of some very faint guitar sounds with the occasional strum when there’s a win. Triggering the free spins mode does kick up the music somewhat but overall it stays very soft.

Guardian of Athens is set in Ancient Greece and so it makes sense that it draws a lot of inspiration from this time. The high-paying symbols are all somehow related to this time period, with things like helmets, swords and piles of gold. The low-paying symbols are card letters but made to look a lot more like the Greek alphabet, even though they are still the usual letters and numbers. I thought it was a nice way to add some flavour to otherwise pretty boring symbols.

The game has High Volatility which means that players won’t be very likely to get a lot of big wins, but when they hit they are more likely to make back a lot of funds. The RTP is 96.58% which is actually also quite high considering the volatility. It means that players are a little more likely to at least break even as they play, although this is an average percentage and can’t be relied on by any individual player.

Players can choose to pick a bet between £0.20 and £100 per spin. This is a great option depending on the size of your funds. If you’re a little low, picking a smaller bet will allow you to play for longer. If you have more to play with, higher bets can obviously result in bigger wins. The maximum win is a jackpot of 16,000x your bet, which is considerably higher than normal.

Meanwhile, the symbols in the game include:

Guardian of Athens comes with a tidy selection of features. I call it that way because although there are a few, they don’t feel like they are vying for attention or being ignored. Instead, the different features all appear often enough to be interesting without being overwhelming.

Most of the game obviously takes place on the main screen. The gameplay stays the same in both the base game as well as the free spins mode. Wilds appear fairly regularly. They all have an associated multiplier depending on the reel they appear on. During the base game, a wild that appears on reel 2 will have a 2x multiplier. If it appears on reel 4 it will have a 4x multiplier, and so on.

There is a real choice here, which I thought was a great way to involve the player. Players that enjoy even more volatility will pick only 6 free spins but with multipliers that go up to 8x the win. Meanwhile, players that prefer to spread their opportunities might go for 15 free spins with a 5x multiplier as the maximum.

Guardian of Athens is a great-looking slot that tries to capture the style and sense of Ancient Greece. Even though it doesn’t offer us too much to look at in the background, the reels themselves are filled with high-quality symbols.

The game is a good choice for people that like high volatility gameplay. Not only does the slot offer some really acceptable RTP, but it also has a maximum jackpot that is very large compared to most other games.

Finally, the free spins mode gives players an additional choice in how they want to play the game. Either pick for the safer but less exciting route or go for the high risk, high reward option. I think a lot of players will really enjoy this possibility.

Play Guardian of Athens for free

Browse casinos with Guardian of Athens and other slots from Quickspin. Create an account and try the game for free before making a deposit.

You can play Guardian of Athens in English, Finnish, Swedish, German and 24 other languages. 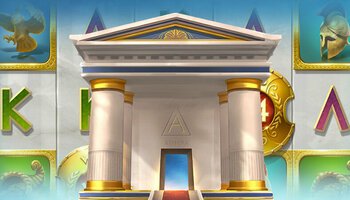