It’s time to let your hair down and to headbang to some of the best rock tunes around. Perhaps you can leave your leather pants and animal prints aside to play this slot game. This game needs very little introduction. As you can assume, it’s a slot game dedicated to 80s legendary rock band Guns N Roses.

Founded back in 1985, Guns N Roses still enjoys significant popularity and bringing its rock anthems to audiences and concert venues across the world. So, when Swedish software provider NetEnt decided to create its NetEnt Rocks! Trilogy and had to think up of three legendary music groups, Guns N Roses was a no brainer.

Launched in the early months of 2016, the slot game itself is a music riot of colour, immersive features and loud rock ’n roll that emulates that of a concert venue. I have already covered some of the slot games within this series, but to me, this one is the best by far. It feels like NetEnt really went all out to deliver the finest rock-based music slot.

To do this, there are five Guns N Roses tracks for you to listen to as you spin the reels. Legendary duo Axl Rose and Slash also have a pivotal role to play in the game. To get into the spirit of things, I put on my bandana to really get into the mindset.

Spread over five reels, three rows and 20 fixed pay lines, this low to medium volatile slot game, has more than enough features to have you sweating with delight.

So, without further ado, let’s dive into the nitty-gritty details of this game.

Since this is a game based on the iconic American band, you can expect a few surprises, including a variety of wilds, bonus symbols, free spins and much more.

NetEnt deserves a round of applause for creating a slot machine that is so intricate and elaborate. Don’t go into playing this game thinking you’ll land yourself numerous features, as some of them don’t tend to crop up that often. It can be a little frustrating if you are spinning the reels hoping to land a specific feature because they don’t turn up as much as they should.

In my personal opinion, this slot game embodies the modern slot game perfectly, both in terms of design and art and entertainment value. I often wonder what the band itself had to say about this game, especially the rather aloof guitarist Slash.

Just like the songs of this band have managed to change many people’s lives, this slot game thrives in rocking you to the core. It gave me a few solid hours of entertainment and managed to walk away with quite a bit of bob. This does not, in any way, mean you can make some solid moolah, but with an RTP of 97%, it is not too farfetched. Then again, there are absolutely no guarantees.

If it’s rock classic slot games you are after, you might as well check out the other slot games in the series, Motorhead and Jimi Hendrix.

Browse casinos with Guns N' Roses and other slots from NetEnt. Create an account and try the game for free before making a deposit.

You can play Guns N' Roses in English, Finnish, Swedish, German and 20 other languages. 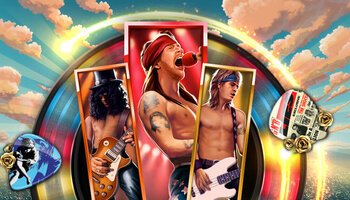