Play Hall of the Mountain King

Enter the Hall of the Mountain King and meet the mischievous troll king. Just be careful when the hammer starts to swing.

Quickspin released Hall of the Mountain King in the spring of 2019 and it got the attention of a lot of players. This wasn’t just any regular slot, but something noteworthy and different.

The game takes inspiration from Edvard Grieg’s play Peer Gynt and especially the song Hall of the Mountain King. This song has inspired a lot of musicians, but this is the first time we got a slot based on a classic composition.

It was a bold move to take something so loved and well-known as Hall of the Mountain King. Quickspin knew this and they took it seriously. The result is a gorgeous game that is a proper homage and home for the song.

What makes this game so interesting is the volatility. The slot is just like the troll king himself, mischievous and unpredictable. You don’t just come in here and try to play it cool. Here we go all in.

The trolls welcome you to their home and if they like you, they will take you to meet the Mountain King. The king likes to whisper promises of riches to adventurers like you, but there is only one way to find out if he is a troll of his word.

Hall of the Mountain King is a gorgeous game, where the developers really went all out. The hand-drawn style is a perfect choice and the trolls are full of personality. Even though only the king has a proper story, you can easily fill in the blanks just by looking at them.

What I most love about the slot is the soundscape. Not only the music, but also the sound effects and the attention to details. Everything that you hear belongs here and nothing is out of place. And if you are going to call your game Hall of the Mountain King, then you know that song must be in there.

When the reels start to spin, the music comes alive. Grieg’s Hall of the Mountain King is adapted to a perfect version for this slot. The sound designers edited the song to fit the game and loop just right. They knew that this was the one part you can’t afford to mess up.

The reels are chock-full of beautiful symbols, that all match the theme. The high-tier trolls are obviously great, but even the low-tier card numbers look nice. They are done as stone carvings so they don’t look out of place.

There are two special symbols in addition to the ten regular ones. The scatter is the king’s hammer, which activates the Free Spin feature and the wilds are a little special too. First of all, they are very common. It is easy to get one or two every other spin. They can also increase your multiplier even if they are not a part of the winning combination.

During the base game, the slot doesn’t seem like much. Just your regular everyday game with a little multiplier action in the mix. But when you get a summons to the king’s hall, then things get really wild. The three-phased Free Spin feature is a whopper and it is the best way to win.

Hall of the Mountain King is a high-volatility game that loves the extremes. You can expect to see a long dry spell followed by a massive win. If you activate the free spins, you are in for a ride of your life. Anything can happen under the trolls’ mountain.

On the left side of the screen, you see the multiplier meter. It will grow for each wild you get on the reels. The multiplier applies only to that one spin and then resets. Fortunately, wilds are a common symbol, so you will often get at least one or two wilds.

During the Free Spin feature, this meter gets even better. The king can destroy some of the pieces and even better ones fall to the top. The maximum for regular spins is 5x and free spins can take it up to 15x.

The king likes visitors. Be careful though, as he tends to break stuff with his massive hammer. This is a three-phased feature with no predetermined number of spins. The feature ends when the last phase is done.

During the first phase, you can see the low-tier symbols stacked up on the right as your progress bar. When you get a win, the king will break the lit-up symbol and replace it with the corresponding high-tier symbol. Then you will drop back down to the start of the progress bar and begin again. The phase is over when you reach the top symbol.

During the second phase, the progress bar is now filled with wilds. The same rules apply, but now the wilds are released to the air and whirl above your head. Collect as many wilds as you can before you reach the top.

The third and final phase is exactly three spins long. Now all the whirling wilds you collected fall down and cover a random symbol on the reel. Every single one of them will fall on each of the three spins. So if you got all 6 wilds, that means 18 new wild symbols will be placed in phase three.

Quickspin took a risk when they decided to make a slot based on Grieg’s well-known composition. I wasn’t expecting to see a slot based on a piece of classical music, but I was positively surprised to see how well it actually worked.

The biggest thing about this slot for me are the graphics and sound. This happens to be one of my favourite classical compositions, so I wasn’t going to go easy on it. Quickspin did not disappoint and they seemed to go above and beyond with this one.

As for the game itself, it is a high-flying slot with a lot of extremes. It is not a casual walk in the park, but an all-out brawl. One thing that bugged me, was the fact that everything revolved around the Free Spin feature. If you get there, you win big, but that’s about it. I’m not sure if that is enough for me in the long run, but I know which game to play when I want to in guns blazing.

Play Hall of the Mountain King for free

Browse casinos with Hall of the Mountain King and other slots from Quickspin. Create an account and try the game for free before making a deposit.

You can play Hall of the Mountain King in English, Finnish, Swedish, German and 23 other languages. 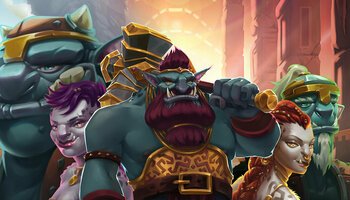