Halloween Jack is the terrifying story of a cursed jewellery box that houses all sorts of horrors. Let’s see if I find my way through the terrors and get to the treasure.

The game was released by veteran developer NetEnt in 2018, which in many ways makes it brand new. The slot incorporates a wide variety of features, fittingly moody graphics and a suitable soundtrack. The 5-reel, 3-row playing field with 20 paylines is about the only standard thing about it!

The first thing I noticed when I started the game up again was the graphics. Not only are they beautiful like in most NetEnt slots, but they are also actually scary and dark. Where a lot of slots try to stay away from being too terrifying, Halloween Jack embraces it. Not that the images are terribly gruesome, they’re more unsettling and moody.

The slot also holds quite a number of animations, from symbols on winning paylines to the start of the free spins mode, the background and the special features. It creates a lot of movement that helps bring the game alive for me.

As I’ve come to expect from NetEnt, the soundtrack fits the theme of the slot excellently. It’s dark and creepy without being over the top. Imagine the unsettling music you’ll find in older horror movies and the sound effects that belong to them.

Halloween Jack has original images for the higher-paying symbols and uses cards for the lower-paying symbols. Even though that’s slightly disappointing to me the card symbols have been created to fit the theme, seemingly as if they’re being dragged down into the earth by unliving creatures.

The symbols all look sufficiently different to keep them apart, and even though the game is dark it didn’t hurt my eyes to see what was happening. The slot sets the mood without just making everything black.

As can be expected from a NetEnt slot it has quite a lot of features. I wouldn’t say any of them are terrible surprises, but they are quite rare in other slots.

In my time as a slot player, I’ve only seen Walking Wilds a handful of times. I think the concept is okay but the choice for NetEnt to have them trigger re-spins on top was a good decision in my opinion. This seems to be something only NetEnt has started implementing as it’s been part of Jack and the Beanstalk too, but I haven’t seen it outside this developer’s slot catalogue yet.

The Walking Wilds showed up quite frequently and it would happen that a second Wild would show up before the first one had gone off-screen. All these would be re-spins, resulting in up to ten or more re-spins in a row.

Getting 3 Scatter Symbols on the screen trigger the Free Spins mode. This starts with a creepy skull appearing from the green mist before we start. The main difference with the base game is the lantern symbols. These fill a tracker on the side of the screen:

Every time any of these Wilds show up it counts as a Walking Re-Spin Wild which means not only is the Wild bigger, the spins don’t count for the free spins. On top of that, they can add additional Lantern symbols and they even add a multiplier to any wins!

All in all the Free Spins mode was consistently a really positive point in the game, often giving more than a dozen re-spins in a row while still increasing the effects of the game mode.

Halloween Jack is one of the few actually scary slots that are available right now. The graphics and music are excellent and do a great job at setting the mood. Meanwhile, it’s animated to the point that you feel like it’s alive.

Even though there aren’t a lot of scary slots there are a few. Ghost Pirates by NetEnt itself is maybe the predecessor of this slot, but it’s by now more than 10 years old. Mythic Maiden meanwhile is newer than Ghost Pirates but also almost a decade old. Still, both slots do a good job at setting an eerie mood.

I was a fan of the features more than the look and feel of the slot. The Walking Re-Spins were already very lucrative in the base game, but they really shine in the free spins mode. It didn’t take me long to see the High Volatility actually pay off for once. With the ability to choose a bet between £0.20 and £100 per spin it does allow some reasonable flexibility and a max. win of 2,000x your bet is very respectable in my opinion.

Browse casinos with Halloween Jack and other slots from NetEnt. Create an account and try the game for free before making a deposit.

You can play Halloween Jack in English, Finnish, Swedish, German and 20 other languages. 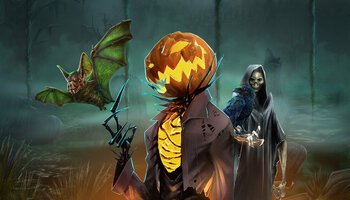