Hammer of Vulcan brings ancient Roman mythology to life with its focus on Vulcan, the god of fire, who strikes his anvil to create some of the most powerful weapons that can be wielded by the other gods. As the player watches him work, they’re also granted access to Free Spins, Multipliers and Stacked Wilds.

This game was released in 2020 by developer Quickspin and fits the trend of games they released during that time drawing inspiration from classic myths. Vulcan is the main character in this game, but he doesn’t appear very frequently. Instead, players are surrounded by images and symbols that remind us of his work but not so much of the character itself.

The slot plays out on a 6-reel, 4-row playing field with a total of 4,096 paylines thanks to the Ways To Win feature. Symbols are based on the work of Vulcan, while the low-paying symbols are simple card letters. There aren’t too many animations, mostly consisting of winning tiles erupting in flame. The background shows us the outside of the forge, with animated lavafalls that looked nice.

Hammer of Vulcan uses a wide variety of symbols coupled with a larger playing area to land on High Volatility. The larger number of paylines is mostly helpful in creating a number of wins at the same time, but when these aren’t longer than three-of-a-kind they often still can’t make back the funds per spin. As I played, I did find my coins to drop rather quickly which attests to the high volatility of the game, which might be even higher than similar slots.

Players can help decide what they want to risk per spin by setting their bet to an amount between £0.10 and £100 per spin. It also comes with a sizeable jackpot, granting players the opportunity to aim for a max. win of 20,437x your bet.

Hammer of Vulcan brings the players a limited number of features when compared to their other slots. That’s not to say there aren’t any features, but they don’t play as big a part in the gameplay. The features include:

The free spins mode is quite difficult to activate, even though the Bonus symbols aren’t especially rare. It’s getting 3 or more on the screen that is the problem. This means the player will spend most of the time in the base game, which only has a single feature.

This feature is the Hammer Strike, which translates to a Stacked Wilds mechanic. Occasionally, a Hammer Wild appears on the screen. At that point, a hammer comes from outside the screen to hit the tile and turn all symbols below the Wild into additional Wilds. This can mean only the bottom symbol on the reel is a Wild but usually, it will in fact be a full reel.

Hammer of Vulcan is actually pretty good at granting wins during the regular base game, even if those wins aren’t very high. Most of the time these wins appear organically, without the Stacked Wild. When there is a Wild, the wins aren’t necessarily any higher.

If the player does manage to activate the free spins mode, the gameplay stays the same. The only addition to the game is that any time a Wild appears, the win multiplier is increased by 1. This means that the free spins mode gets more beneficial as it continues, which can last quite a while thanks to the ability to re-trigger spins.

The Free Spins mode is extremely volatile as it depends on retriggering spins to keep going and Wilds to increase the multiplier. I’ve had times where I walked away with barely a dozen spins worth of coins, other times I walked away with more than a hundred.

Hammer of Vulcan is a quintessential Quickspin slot. It combines nice graphics and some original ideas with basic video slot gameplay. The game is easy to get into, the features are easy to understand and it looks modern enough to keep the eyes interested.

Players that are looking for something highly volatile will be pleased with this slot as it is not very lenient in granting big wins but the few that are triggered will be quite massive. In contrast, people that want to play a game that isn’t too harsh on their funds will not find that here.

An extra incentive for people to try it out would be the high jackpot, although the volatility means that there is little opportunity for anyone to actually win it. The game will be a difficult nut to crack and it might be only power players that can fully enjoy the experience.

Play Hammer of Vulcan for free

Browse casinos with Hammer of Vulcan and other slots from Quickspin. Create an account and try the game for free before making a deposit.

You can play Hammer of Vulcan in English, Finnish, Swedish, German and 24 other languages. 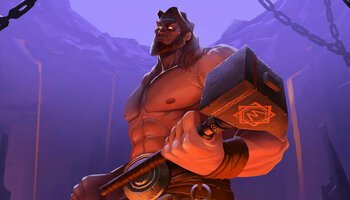