NetEnt's Hansel and Gretel is part of the Fairytale Legends triplet of slots that are based on three popular fairy tales. All of the games in the series share similar features, however, I find Hansel and Gretel to be the most exciting.

The game is filled with extra features that entail multipliers, stacking wilds, respins, a free spins bonus and more. What I especially like about it is the low to medium variance and the theoretical return to player (RTP) of 96.71%, which is higher compared to Mirror Mirror and Red Riding Hood (the other two games in the series).

In my experience playing Hansel and Gretel, I’ve come across many small wins consisting of gems. As if by a rule, the medium-sized wins that I won were helped by the expanding wilds and respins, which aren’t that rare to crop up. The pick-me bonus game is probably the most lucrative because the win multipliers range from very low to very high.

The game’s premise contains the plot of the Hansel and Gretel fairy tale. The reel-set is flanked by the two siblings who have gone astray in the dark, foggy wood. The house made of gingerbread and candy isn’t too far down the path but worry not, the designers had made her doze off so that you can casually pick the candies that reveal cash prizes.

A good portion of the gameplay is filled with visual niceties and there are few video transitions that skip from the base game to the bonus features. The wispy fairy that appears every time there is a reel modifier or bonus feature. Also, winning outcomes are treated to a fair amount of stardust on the reel-set to celebrate the occasion.

Even though Hansel and Gretel is very similar in nature to Mirror Mirror and Red Riding Hood, I think it compares more favourably in terms of graphic design and gameplay. The differences are subtle, but it appears that more attention to detail has been paid to Hansel and Gretel than the other games.

There are a total of three-reel modifiers and three bonus features in Hansel and Gretel. The conventional logic goes, with that many features on the count, at least few of the lot are bound to trigger during a casual sitting on this game. To which I can agree. The low to medium variance seems to nudge the maths to trigger expanding wilds rather frequently, and that’s a start.

Like the iconic Starburst slot, Hansel and Gretel can produce payouts both left to right and the other way around, as well as when three matching symbols land on a payline(s) the middle three reels. The layout is quite standard, with three rows and five reels that spin across ten paylines.

There are three sets of symbols on the paytable: low-paying gems, high-paying picture symbols and the game's logo, and the wilds and scatters.

In the gems category, wins for three matching symbols pay 0.5x your bet, which I think is quite decent compared to so many other games, including NetEnt games. Four of a kind return the full bet, while wins with five pay 4x your bet.

Hansel and Gretel's symbols pay 1x for three, 2x for four and 10x for five. This kind of arrangement for the payouts reflects the game’s medium variance. Notice that wins for three and four symbols in both categories don’t differ much from one another.

Another exciting detail I’ve noticed is that gems can often come in blocks, both stacked on a full reel and across two or more rows. The most valuable symbol is the game's logo, which can pay 40x your bet for five of a kind, 6x for four and 2x for three.

Here is a game that does everything perfectly. It has a nice graphic design, random number generator that rewards wins across the spectrum (small, medium and big), and extra features that can appear with any given spin. To the players who haven’t played Hansel and Gretel, I sincerely recommend it. Although it is most likely going to trigger small wins, a medium to high win may emerge from either the pick-me bonus game, the free spins feature or both.

Browse casinos with Hansel & Gretel and other slots from NetEnt. Create an account and try the game for free before making a deposit.

You can play Hansel & Gretel in English, Finnish, Swedish, German and 20 other languages. 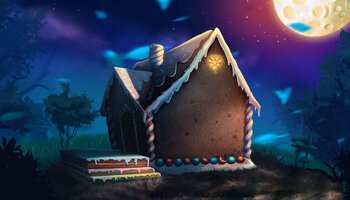