The tamest and cutest creature in the world has been made into the Wild symbol of Happy Panda. The more you see of it, the greater the potential becomes for landing successive winning outcomes.

The most important gameplay feature of this NetEnt production comes with the Wild, but it isn't the only one. Happy Panda comes with three jackpot prizes: Minor, Major and Mega. The first two are little treats, however, the Mega prize is a £10,000 behemoth that can be won in a Hold and Win type of jackpot game.

I played Happy Panda several times. I was interested in the jackpot game and the fact that this is still a fresh release, having been released in 2020.

The game has an interesting set of specs. The 3x5 layout and 20 paylines are within the ordinary. Volatility-wise, the official word is "medium" and this is exactly how the game behaves.

You can land a winning outcome once about every six or seven spins. The theoretical return to player (RTP) is 96.64%, but mind that up to 10% of this number ought to be held by the jackpot prizes. Nevertheless, Happy Panda has a decent RTP value.

In terms of design, the game isn't going to blow anyone’s mind. The graphics are basic, the animation is minimal, and the soundtrack is alright. I have no idea why NetEnt's designers decided to place mallards and cranes in a thick bamboo forest, but hey, let them speak their mind.

I didn't find the totality of the design and sound overly enticing, but let's just say it manages to pass a basic threshold of expectations. Not too shabby, overall, since the focus is on the panda Wilds and what they can do once they start clinging on the stalks of bamboo.

The Wild can land in one or more positions anywhere on the five reels. If you get a wild on the middle or top row, you've triggered the...

Basically, each wild symbol can linger on the reel set until it exits the layout from the bottom row. The Wilds can connect with any available winning outcome or with additional wilds posting on the reel set.

I said that the Wild is the most exciting gameplay feature on Happy Panda. This is because thanks to it, the base game can sometimes feel like a free spins bonus.

Do you begin to see why this is a Happy Panda? The animal thrives in this NetEnt game. If you get a Wild on top of a Wild, the two will merge and expand into a full-stack. The fun and potential wins are not over because this event retriggers the Falling Wild Respins.

Three, four and five lotus flowers anywhere on the reels can trigger five, eight and 12 free spins. The difference between the base game and the free spins feature about the Panda symbol is that landing a Wild makes a reel-high stack of Wilds by default.

Thanks to the features related to the Wild symbol, the base game feels like an extra feature. The Wilds aren't too uncommon, which I find to be amazing.

On the other hand, getting to the free spins bonus requires some waiting on your part. Let's just say it doesn't trigger often. I've only got to play it twice in my several sittings on the game.

Part of the paytable is a gold medallion of a panda footprint. This is the jackpot symbol. It isn't exceedingly rare but it does require a specific condition to count towards the bonus game.

The bonus symbol has to appear on the reel set during the Falling Wild Respins. When you get three medallions, Happy Panda takes you to the Hold and Win game. For those who are not familiar with the act, you get three spins. Each time a bonus symbol stops on the reels the number of spins resets back to three.

You can win either one of the three jackpots by landing a specific number of bonus symbols. If Happy Panda decides to treat you to a plethora of these symbols, you may even get the £10,000 Mega prize.

The good part about the Giant Panda Jackpot game is that you get to win some kind of prize regardless of the outcome. The three initial gold medallions can be worth between 10 and 200 coins.

I was pleasantly surprised by the paytable structure. Understable is that the royal card symbols tend to yield low prizes but the high-paying symbols are quite attractive.

Another detail I'd like to mention is that regardless of it being a jackpot game, Happy Pand requires at least 20p to play. This isn't such a huge amount, even if you want to just try the game.

Coin values range between 1p and 50p, however, mind that the increments don't rise gradually. In other words, you'd have to fiddle with the Coin Value and Bet levels in order to tune your desired wager.

The paytable consists the following amounts - expressed in coins times the coin value:

Conclusion If you forget about the lacklustre graphic design you’ll be able to get into the game’s whims and jolts. I liked Happy Panda overall. The Wild symbol makes the gameplay a lot more exciting as opposed to any game that has a Wild tasked with the usual objective.

One thing that I didn’t like was the extremely long wait for the free spins bonus. I didn’t count the number of spins, but it felt like an eternity. Thankfully, in between, there were enough Wild Respins and bonus symbols to keep me on the edge.

Browse casinos with Happy Panda and other slots from NetEnt. Create an account and try the game for free before making a deposit.

You can play Happy Panda in English, Finnish, Swedish, German and 20 other languages. 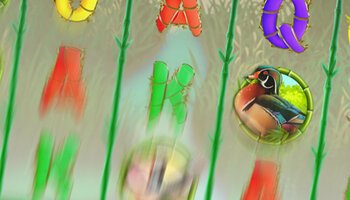