Hat Trick Hero takes place on the football pitch where two teams fight each other for the win. This Betsoft game features a number of football-related symbols as well as Walking Wilds and re-spins.

Released in 2021, this slot is one of the latest releases by the popular studio. Unfortunately, I didn’t think it looked quite as good as some of the other games they have released. It’s not an ugly slot by any means but the symbols are static, as is the background. We can see a goal to the left of the screen which is slightly used when the Walking Wilds appear. Behind the 5-reel, 3-row playing field we can also see a stadium filled with people but they don’t move at all.

The game uses 25 paylines that players can get wins on. Whenever that happens, the winning symbols light up and a spotlight shines on the playing field. Other than that, there is very little that happens. All in all, the game feels rather static. The symbols are also pretty simple with the low-paying symbols simple card letters. The high-paying symbols are originally created for this game but don’t get much more creative than trophies and soccer cleats.

When it comes to sound, the developers made some interesting choices. The background music is an energetic techno song but it is drowned out somewhat by the effects when the reels spin. It sounds like a rattler whenever the reels come down. If there’s a win, the game plays a jingle with a lot of bleeps. None of it sounds bad, but it doesn’t really feel football-related either.

Hat Trick Hero has a number of different symbols that can be divided into the usual high- and low-paying groups. There are very few animations. The only real ones I could see were the Walking Wilds, made to look like footballs that move across the screen towards the goal with every spin. They aren’t highly animated but there are some particle effects that are used to create the illusion of speed.

When it comes to the gameplay itself, the slot features High Volatility that I felt a lot during the game. It was hard getting an organic win as I played and even the wins I did get were often too low to pay back more than a handful of spins. It was during the re-spins mode that I was able to recover from the time playing before that. Do expect to go quite some time between wins if you want to try out this game.

It’s possible to deal with the volatility slightly by adjusting your bet. The game allows bets between £0.02 and £12 per spin. This isn’t as much choice as other slots offer but it will prevent players from betting too much. The maximum win is 1,260x your bet which I consider very low when looking at the high volatility. It doesn’t feel like the risk is going to be rewarded.

Hat Trick Hero is a rather simple slot when it comes to the included features. Most of the time the player will just be playing the base game. Even when the features are triggered, the main screen won’t change and it’s only subtle differences that make it clear a feature is activated. This does make the game feel somewhat boring, and I think maybe having the screen shift to another perspective might have made it feel a bit more engaging.

All of these features work together in the Power Shot mechanic. During the base game, the Power Shot symbol can appear and act as a wild. If there are 3 or more on the screen, these symbols will shoot a ball towards the goal on the left side of the playing field. Each re-spin, the balls move 1 reel over. If a new Power Ball symbol appears during the re-spin, it will also shoot a ball at the goal.

Players will be awarded any wins during the re-spins as normal. Scoring with the Walking Wilds on its own does nothing, but the game does keep track of the total number of goals during a single re-spins activation. If the player manages to score 15 times, an instant coin win is awarded. In my time playing, I never got more than 6 goals so this is very unlikely and shouldn’t be expected.

Hat Trick Hero is not a bad slot per se, but it does feel rather underdeveloped and simple. The symbols are all static with only minimal animations when there’s a win. The background also doesn’t move at all, with the public being just a simple picture. Even the soundtrack doesn’t enforce the idea we’re at a football match.

The features are interesting enough to spice up the gameplay a little bit. Since it all depends on the Power Shot symbols it can take a while for it to trigger. As far as win rate, I felt that I ended up with slightly more than I started but I didn’t notice any huge wins. The fact that the maximum win is also a bit low makes it a bit puzzling why people would want to try this slot.

It seems obvious the main reason this game was released is because the Eurocup is about to start. The developer likely just wanted something to draw in football fans and for that, they released this game that is fine but feels underdeveloped.

Browse casinos with Hat Trick Hero and other slots from Betsoft. Create an account and try the game for free before making a deposit.

You can play Hat Trick Hero in English, Finnish, Swedish, German and 22 other languages. 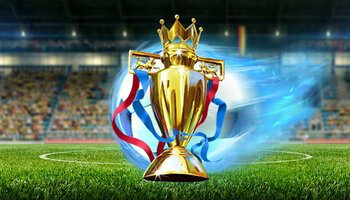