Pragmatic Play brings us Hercules & Pegasus, your classic Greek gods’ crossover. In this review, we’ll be taking a look at the game from every possible angle. On Bojoko, we’re here to wade through countless slots, so you, the player don’t have to. Without further ado, let’s get down and dirty with Hercules & Pegasus.

Be Afraid, be Very Afraid

Oh my. Even just from the game’s home screen, it’s not looking good. Nuh-uh. I really can’t get with the ridiculously over-the-top character design. Hercules looks like a bodybuilder with a serious steroids issue after a cosmetic surgery experiment gone terribly wrong. This dude is seriously freaky.

Our winged wannabe, Pegasus, is akin to an overly chipper steed, enrolled in an online class in androgyny but is flunking most of the modules. While genders beyond the binary should very much be embraced by providers, here, pegasus is a terrible poster pony.

Hercules & Pegasus joins the ranks, albeit closer to the muddier end, of video slots with a Greek mythological theme. Age of the Gods this most certainly ain't.

Style aside, the features in Hercules & Pegasus go like this:

While this reviewer was hoping for the features to improve upon an intensely, almost vomit-inducing graphics package, they are a very standard affair and do next to nothing to enhance this game. While some players may be of the more-features-are-better persuasion, others focus more on graphics. Unfortunately, Hercules & Pegasus fails to deliver on both counts.

Autoplay is available. It’s there. Although, as a reviewer who doesn't play a lot of Pragmatic games, the skin feels pretty awkward and is lacking intuition that you think would be the bedrock of a slot interface.

Stopping the autoplay function isn't as easy as it should be. Clicking on the big red 'stop' icon button should, by most players' standards, pause the game immediately but, instead, you need to click on the relatively obscure ‘Autoplay’ button below. Not only incredibly poor user interface design but, from a responsible gambling perspective, it's also very concerning.

Don’t Waste Your Time or Money

Where do we start? I’ve honestly never had such a negative response to a game. I understand that game developers can be under a lot of pressure. Often, teams are working to tight deadlines and to weird briefs while having managers breathing - dragon-like - down their necks. This, in turn, can manifest itself in a subpar title being released, much to the detriment of the provider itself.

My problem with this slot isn’t just one purely of aesthetics. Some people might even enjoy the design, although I imagine this number to be very low. My main concern springs from the fact that players wager their hard-earned money on slots and deserve better, much better.

Given the poor-quality design, lazy mechanics and non-inventive features, the reason this slot ranks so low is no myth at all.

Play Hercules and Pegasus ™ for free

Browse casinos with Hercules and Pegasus ™ and other slots from Pragmatic Play. Create an account and try the game for free before making a deposit.

You can play Hercules and Pegasus ™ in English, Finnish, Swedish, German and 18 other languages. 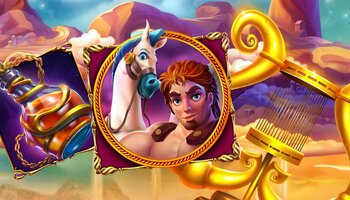