Hidden Valley takes place in a mysterious valley hidden from sight and populated by a varied collection of people. There are also free spins, multipliers and stacked wilds that might get someone to make their way to the top of the staircase.

Created by Quickspin and released in 2018, Hidden Valley offers a non-standard playing field on which to play. While reel 1 and 5 have 3 rows, reels 2, 3 and 4 all have 4 rows. This usually translates into it being slightly harder to get a payline. Since the game has some helpful features it still stays at a Medium Volatility with a total of 40 paylines.

The game looks good, with creative characters for the high-paying symbols and a beautiful image of the hidden valley as the background. Unfortunately, most of the background is obscured by the playing field. I was also disappointed that the low-paying symbols were card numbers, which detracted from the experience.

The soundtrack offers a pleasing song that reminds me of the quiet moments in adventure movies. This is emphasised by the more bombastic celebratory music that plays when you get a winning payline. The sound effects are almost non-existent with only a drum whenever a Bonus symbol appears on the screen.

All of the symbols are drawn in sharp detail, with the different characters especially nice to look at. They don’t really have any context or personality but I still appreciate the effort. Most symbols are unfortunately not animated even when part of a win, except for the Bonus symbol which starts to spin.

If these payouts seem incredibly low, don’t panic. The multipliers are a huge part of this game, with players able to pick a bet that adds more or fewer multipliers to all wins. This means that most wins will have a multiplier applied to it.

As I just mentioned, multipliers play a huge part in the game. Wilds have a multiplier value applied to themselves, adding it to any win they are a part of. Players can pick a bet for these multipliers as well. The more you spend per spin, the higher the multiplier starts and ends at.

First a quick overview of the features:

At any point during the base game, players can choose to increase or decrease their bet size to raise or lower their multipliers. This increases the size of a bet but is independent of the actual bet size. The game simply calculates the cost for you automatically.

These are the possible ranges:

This hopefully makes clear how important multipliers are as part of the gameplay here, and it explains the low coin value on wins. Picking any set of multipliers means that the game will rotate randomly between the available multipliers per spin, and apply that multiplier on each Wild that appears. Wilds were reasonably common during my time playing which made choosing for the higher multipliers a good choice. Of course, keep an eye on your funds to see how it’s working out!

Meanwhile, the Free Spins mode also shouldn’t be discounted. Even though it wasn’t extremely common I did see it activate rather often and it was a great addition to the game. Once you get 3 Bonus symbols on the screen the game mode activates. First, a bonus wheel is shown, which picks the number of free spins as well as seeing if any of the 3 characters are turned into Bonus Wilds.

During the Free Spins mode, whenever 2 Bonus symbols appear on the screen the player is prompted to pick one. This can hide additional free spins or turn a character into a Random Wild for the rest of the free spins mode. Do be aware that the Random Wild doesn’t get the multiplier applied to it that normal wilds do! They do help facilitate wins, however.

I found Hidden Valley to be a lot of fun, especially because of the multiplier mechanic that plays a huge role in the game. If a player decides to reduce the impact, they will always pay less per spin which seems a fair trade for the reduced chance of making back your bet. While I was playing, I found using higher multipliers was the better option as it seems that is what the game was balanced around.

The game looks beautiful. I was quite disappointed that the background was largely obscured by the playing field. Luckily, the symbols are all drawn in high detail with especially the characters jumping off the screen. The game doesn’t have as many animations as other slots but it still looks very energetic.

Players that enjoy a game with a high focus on multipliers and medium volatility will have a good time with Hidden Valley. The irregular playing field might be a turn-off for some players though, as it does mess with the paylines in the game.

Browse casinos with Hidden Valley and other slots from Quickspin. Create an account and try the game for free before making a deposit.

You can play Hidden Valley in English, Finnish, Swedish, German and 23 other languages. 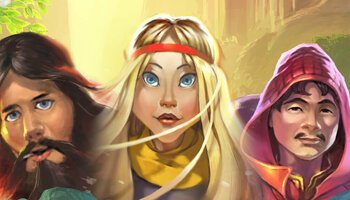