Come on down and step on to the podium. It’s time to spin the wheel and lock your final answer in ELK Studios’ Hit it Big.

ELK Studios made a game that is based on the idea of the all-American game show. You get the energetic host, the wall of monitors and the excitement of the game itself. You are now the contestant, and we’ll just see if you leave home empty-handed.

Hit it Hard is based on classical fruit machines from both Vegas and the UK. The game is pretty close to the Vegas-styled old-school slots and the bonus features are very British. It is a great mix that takes the best of both worlds.

Hit it Big got a sequel called Hit it Hard. It’s not a thematic sequel, but both have the same kind of connection to classical slots.

So, are you ready for heart-racing action, volatile gameplay and the excitement of being in the limelight? If you are, then join us on the stage and let’s see how the game works.

Hit it Big looks exactly like a quiz show should. This time it’s not about how much you know, but how well you can spin the reels. Step on to the podium and see how well you’ll do.

The slot mixes things up by combining both the Vegas-styled and the UK-styled slots into one and adding a quiz show theme on top of it. The huge monitor wall is showing the audience all the features and wins you are hitting while the host narrates the game.

There is no music in this game, but rather a sweet cacophony of game noises. The slot itself sounds like an old-school slot with all the bleeps and bloops you would expect. Then there is the studio noise. This is played on a major TV-studio, where you aren’t the only one playing.

If you listen closely, you can hear other contestants playing their own games. There are a lot of legendary shows being taped right here and you can hear all the catchphrases from them.

The game uses very traditional symbols and there aren’t many of them. There are only four different types of sevens and three types of BAR symbols. They are all colour-coded to make it easier to read.

In addition, there are two special symbols, a wild and a Hit it Big symbol. On a regular spin, the wild is just a normal wild, but the Feature Match can add stacked and locked wilds as well. The Hit it Big symbol is a scatter that activates the Bonus Game.

The Bonus Game feature is the key feature and the reason why you want to play this game. It bears resemblance to Press Your Luck, but this time the Whammies are just bandits. Just stop the lights and hope you hit a prize.

This is a high-volatility game, which is pretty obvious. It’s pretty hard to get good wins, but when you do, you hit it big. Every time you activate any of the features, you have the potential to get a huge win. Sure, a small multiplier in the base game isn’t going to do it, but a stacked wild with 10x multiplier is a good start.

At the start of every spin, you can see random boosters appear on both sides of the reels. If you get a match vertically, that bonus is activated.

Boosters include multipliers up to 50x, respins and special wilds, including stacked and locked wilds.

This is the main attraction, the show-stopper, the final showdown. Get a Hit it Big symbol on reels 2, 3 and 4 and the bonus game is on. Lift your gaze up to the monitor wall and try to hit the big bucks.

The game is played on multiple tiers. The closer you are to the centre, the better your prizes. Hit the stop button when you feel like it and see what the light stops on. There are multipliers, cash prizes and arrows that can move you from one tier to another. When you win something, that square is replaced by a bandit, which stops the game if you land on it.

The centre of the screen is the Big Hit. There you get a random multiplier that is between 100x and 1,000x.

The quiz show theme was a great idea from ELK Studios. It fits a slot perfectly, as both have the same kind of high-intensity gameplay. Sure, we don’t get to answer any trivia here, but the features are surprisingly similar.

The only thing that bugged me about this game was the dry spells. There were times when I just had to plough through twenty spins before I could get a single win, which wasn’t even enough to cover my bet. But on the other hand, hitting the Bonus Game twice covered it and then some.

This game is perfect for those players, who like their games intense and volatile. A love of quiz shows is also beneficial, as muting this game takes away so much.

Play Hit It Big for free

Browse casinos with Hit It Big and other slots from Elk. Create an account and try the game for free before making a deposit.

You can play Hit It Big in English, Finnish, Swedish, German and 18 other languages. 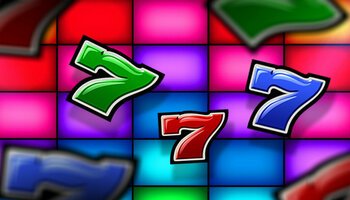