Ho Ho Tower is a special tower built specifically for the holiday season, its own name alluding to Christmas. The game gives these days some extra festivity with its bonus game, random symbols and 99 paylines.

This slot is very clearly set during Christmas, with not only the name alluding to it but the entire appearance dedicated to this special holiday. The game was developed by Elk Studios and released in 2017 with a 5-reel, 3-row playing field. All the symbols are specifically designed to fit the theme.

Of course, the background also plays a part, showing us a city skyline with the Ho Ho Tower in the centre before zooming in on it. The tower stays in the background for most of the runtime, only being replaced by a big wheel when the bonus game starts. There is also continuous snow falling down the screen to add some extra atmosphere. The game comes with 99 paylines, making the slot Medium Volatility.

The music is exactly what you would expect from a Christmas slot, with slight changes to the traditional ‘We Wish You A Merry Christmas’ so as not to be considered copyright infringement. The effects are toned down with wins being a standard short jingle. It’s all very agreeable and calming but not original.

All the symbols in Ho Ho Tower are based around Christmas except for one, which as a result stands out quite a lot. I’m not sure why the developers made that decision. The symbols themselves aren’t very animated, except when part of a win line.

I did like the design of the symbols even though the 7s feel very out of place. The different symbols stand out from each other, keeping it easy to tell them apart.

Ho Ho Tower does not have a lot of different features, most of it centred around the wheel. The game keeps the pace up, making it important for players to keep an eye on their budget. They can choose one between £0.10 and £50 per bet.

The features you can find in Ho Ho Tower are:

The Ho Ho Tower symbols appear on the screen rather frequently, often stacked to fill the reel. When they appear and they could be part of a win they randomly select one of the symbols. If this turns out to be the right symbol it will trigger a win. In my experience, that didn’t happen a lot but it was possible for it to generate a large win.

When the Bonus Game activates the camera pans up to the top of the tower where it shows 3 different wheels. The game starts on the smallest wheel, divided into sections. The wheel will spin as long as it doesn’t hit the same section twice. The coins on this wheel range from 200 to 1,500 coins. There are also 2 sections that upgrade the wheel.

If the wheel lands one of these upgrades the game moves to the next wheel, which has higher coin wins on them, ranging from 500 to 10,000 coins. Again, whenever the player hits the same section twice the bonus game ends. Otherwise, it will keep spinning.

If the wheel manages to land on the other upgrade section it will activate the final wheel with the highest coin wins. Even if the wheel lands on the same section twice, the coin win for the second time is still awarded. At this point, all coins are added together and awarded to the player.

The Bonus Game is definitely the best part of the slot as even a few spins can make the maximum coin win very large. In fact, the base game itself isn’t very useful if you’re looking for wins. I found that part of the game to be a steady decline in coins. Over time, the game did end up granting me a net-positive through the wheel.

If you’re a fan of Christmas, Ho Ho Tower is a great way to celebrate this holiday even outside of the season. People who enjoy a basic slot with a wheel feature that makes up most of the playing time will also get something out of this game. The focus on the wheel is very obvious, especially considering the lack of features in the rest of the slot.

Players who are looking for something terribly engaging or want a lot of features probably won’t get a lot out of this game. The basic gameplay is very simple, and I used the Autoplay function most of the time. Because of the volatility, it is still recommended you keep a close eye on your funds because it can drain quickly if the wheel doesn’t trigger.

I thought Ho Ho Tower was a little barebone but it looks good, it fits the theme perfectly and the wheel is an interesting feature. The fact it keeps spinning as long as you don’t hit the same section twice can mean you end up with thousands of coins even without getting to the second wheel.

Browse casinos with Ho Ho Tower and other slots from Elk. Create an account and try the game for free before making a deposit.

You can play Ho Ho Tower in English, Finnish, Swedish, German and 18 other languages. 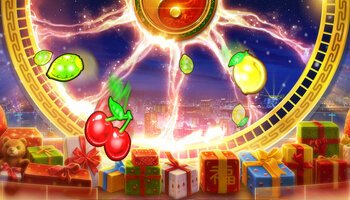