Holiday Season brings on Christmas and the season of merriment. I’m curious to see if this slot can translate that wonderful time into an exciting game!

Set during the end of the year, Holiday Season is covered top to bottom in all sorts of Christmas and New-Year imagery. From the characters drinking champagne and wearing Santa hats to the shops covered in lights and fireworks flying everywhere, the game really sets about catching that atmosphere we’re all familiar with.

Created by Play ‘n GO and released in 2016 the slot is still pretty new. It doesn’t hit the highest levels of graphical fidelity unfortunately, the symbols are largely static and not a lot of special animations are included in the game. Still, it looks fine and has put a lot of time into setting the stage.

The music is not as fitting as you’d expect. Instead of a Christmas song or cheery party music, it plays a rather melancholic guitar song. It does sound good but feels off. When there’s a big win a more enthusiastic song plays but even this doesn’t really fit the holiday theme.

The game itself is built as a standard 5-reel, 3-row slot with 10 paylines. The background of the base game shows a shopping street, the shops covered in colourful lights. During the free spins mode, we move to the big city where we see skyscrapers in the background as fireworks fly everywhere.

The symbols are divided into half original and half card-based. The original symbols are well-drawn and have slight animations, while the card symbols are static and only fit the theme a little bit. I thought that was disappointing as there must have been loads of things they could have done with the holiday theme.

Looking at other Christmas slots, we can see there is plenty of room to play around with the different symbols. A good example is NetEnt’s Jingle Spin, which incorporates loads of holiday paraphernalia to base their symbols on.

The symbols are all over the place, the turkey alluding to Thanksgiving which is of course only an American holiday, while the clock and the champagne bottle reference New Year and the woman wearing a Santa outfit clearly aims at Christmas. It fits the title of the slot but maybe a more focused approach would have worked better.

Play ‘n GO usually doesn’t like to overcomplicate their slots and Holiday Season is no exception. It has some standard features that spice up the base game a little but it won’t hold any surprises to experienced players. None of the features require much input from players, who can turn on Autoplay if they wish.

The biggest difference when starting the Free Spins mode is the change of scenery, where we move from a quant shopping street to the highrises of the big city. It also seems some time has passed as we’re seen celebrating the new year.

As far as gameplay goes, the Free Spins mode plays the same as the base game. Wilds can appear randomly as individual symbols or in Stacked Wilds, filling an entire reel. In my experience, that didn’t happen a lot.

Holiday Season is an above-average slot made by Play ‘n GO that takes a joyous part of the year and uses it as inspiration for the game. Although I think there’s more they could have done with the concept, what they did include is well-made. It shows they put quite some time into the game when it comes to the design.

The soundtrack was kind of an odd duck in consideration, not really fitting the theme. Having a sombre guitar song play for most of the game while we’re presented with images of fancy dinners and celebrations was a little weird.

I am not a huge fan of the holiday season and when a developer does choose this type of slot, I would prefer a more cartoony look since that seems to allow more creativity.

That said, as a slot, it definitely stands on its own. It’s not too similar to other slots for it to disappear into obscurity but also not original enough to really jump out!

Browse casinos with Holiday Season and other slots from Play'n GO. Create an account and try the game for free before making a deposit.

You can play Holiday Season in English, Finnish, Swedish, German and 29 other languages. 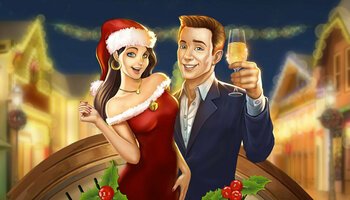