Guide the knight through the perilous lands in Holy Diver Reel Adventure. Risks are high to win those shiny diamonds.

Big Time Gaming has always been an innovative game developer and Holy Diver is a good example of this. The Megaways feature is something we have seen before, but the Reel Adventure is an interesting addition to a well-known formula.

If you are wondering about the name, it’s not a coincidence. BTG has licensed the song Holy Diver from Ronnie James Dio, but that’s about all there is to it. The game has basically nothing to do with Dio or the song, and the name is just there to get clicks. The same happened with another BTG slot that was published only a little while later, The Final Countdown.

BTG is well known for their high volatility slots, though this one is a tad different. The slot has theoretically medium volatility, but it still feels a lot higher than medium from other developers. To be fair, it is a Megaways slot, which are always much more volatile than regular slots.

Big Time Gaming has taken huge leaps when it comes to graphics and sound. Holy Diver Megaways Reel Adventure is a great example of this, as it is a beautiful game with decent sound and music.

The slot features a medieval fantasy theme, in which an armoured knight travels across the land. The knight is properly animated and looks interesting. It’s done so well, that you actually could see similar stuff in an actual video game.

There is one thing that would still need improving, and that is the user-interface. BTG is still using the same blocky UI that it has for years. It has always looked a bit dated, but as the years go by, it gets even worse.

The game has a nice soundtrack. During the base game, you hear your fairly standard medieval-styled ambience with monks chanting. If you stop playing, you can even hear a quiet guitar playing Holy Diver. The best thing about this music is that it doesn’t cut off after every spin, unlike in many other BTG games.

And yes, we do get to hear the full Dio performance of Holy Diver in this game. When the Free Spin feature starts, you are treated with the amazing classic metal tune.

The reels are filled with your obvious choice of symbols for a BTG slot. Those low-tier card numbers are there again, and once again they have nothing to do with the theme. The high-tier symbols are gems, and those on the other hand are an integral part of the story.

The game doesn’t actually have any special symbols on the reels. All of those come in from the Reel Adventure. You can add wilds and multiplier wilds from the Chests of Fortune and from the Shield of Fortune.

The paytable shows what I expected, low wins across the board. Only the highest valued symbol is worth anything in low numbers, while the others give you less than your bet was. The game relies on those wilds and multipliers. You can win big if you stack the middle reels with wilds to create long combinations. Add a few 3x multipliers in the mix and you got yourself an epic win.

The way to hit a big win is to get to the Free Spins feature. But don’t just rush it, you need to level up first. Get at least to level 2, if not level 3 and then collect the free spins. Now you are getting good multipliers on every good win. Sure, retriggering the spins is worth a lot, but you don’t have control over that.

Holy Diver is a volatile slot. In comparison to other BTG’s games, it’s not that bad, but the bar is already very high. In the end, this is an all-out slot, with a potential for massive wins. They don’t come easy, but they are there.

Megaways is a classic BTG feature that randomises the reels every time. You can get anything between 2-7 symbols on each reel and the game will then count how many possible paylines those symbols can have. The more you have, the better it is for you. The maximum amount during the base game is 117,649.

Holy Diver adds a few extra ways during the Free Spins feature. On the highest level, you can have 586,971 ways to win due to the win multipliers. The way the game counts it is a bit weird, but the more the merrier.

The Reel Adventure part of Holy Diver is right here. Your character, the hero knight, is walking towards the enemy at the bottom of the screen. He will either walk or run towards the next chest and every spin takes him a bit closer. When he gets to a chest, he will open it up and you get one of four random prizes.

The gems attached to the shield stay on it until you either complete the set or change your bet. Your level and your shield are linked to that exact wager.

A shield is an important part of a knight’s armour and here it is also a passport to greatness. When you gather all four gems that are shown on your shield, you get a choice. You can either take 10 free spins or level up. If you are already on level 3, then you automatically get free spins.

The higher level you are on, the better the free spins will be. You will always get 10 spins, but the win multiplier will be increased. It’s 2x on level 2 and 3x on level 3.

Free Spins start when you choose to collect them from the Shield of Fortune feature. You get 10 free spins and can retrigger them by collecting the shiny diamonds from the robed enemies. The first four diamonds are worth 1 spin and the fifth gives you 8.

Retriggering free spins also has a second benefit. The minimum amount of symbols on the reels will increase with every retrigger, first to 4, then to 6 and finally to 7.

The best part of the Free Spin feature is the extra wilds. Every gem on reels 2-5 is turned into a wild with a possible win multiplier. If you levelled up before you started the free spins, they can have either 2x or 3x multiplier every time.

Holy Diver is a clever little game. I really enjoyed the Reel Adventure feature. It may be a thinly veiled attempt to get the player to spin just a little more, but it works. I never wanted to stop playing right before a chest. The little story element that the adventure brings is also a positive aspect.

What did bug me was the use of the name Holy Diver. Sure, they licensed that song, but it has nothing to do with the game. It would have been just as good without it. Even though I like the song, here it felt like an attempt to get Dio fans to click on the game thinking it’s about the band.

That being said, Holy Diver Reel Adventure is one of the better BTG slots in my books. I don’t usually go for slots with high volatility and wild swings, but this one was nice. If you like your slots with high variance, then give Holy Diver a spin. It’s absolutely worth it.

Browse casinos with Holy Diver Megaways™ Reel Adventure™ and other slots from Big Time Gaming. Create an account and try the game for free before making a deposit. 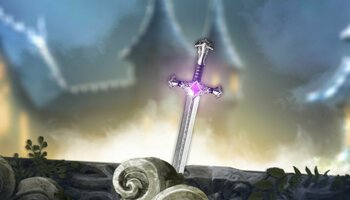