Hong Kong Tower takes place in Hong Kong where an enormous tower is used to project an intriguing slot onto. This game only features some simple mechanics, including a special wheel for coin wins.

The game was produced and released by Elk Studios back in 2017. The game resembles the similar Ho Ho Tower in more ways than just the name. In fact, I would consider them the same game except for the theme. Where Ho Ho Tower is set during Christmas and has the symbols to fit the setting, Hong Kong Tower takes a more generic approach. Both slots make use of a 5-reel, 3-row playing field.

While the different symbols are all unique and look detailed, the game does not stand out in its creativity. At least with Ho Ho Tower, there was some sense of style, while in this game it feels very generic. There are some symbols that give off an Asian vibe relating to the location, but the background is a simple skyscraper. There are also barely any animations except for a win on 1 of the 99 paylines being illuminated, and the wheels in the special feature spinning.

The sound in this slot is very toned down with barely any music to speak off. There are bloops when the reels spin and you’ll hear generic jingles when there’s a win. Almost triggering the bonus mode starts up a sound of increasing intensity but when you don’t get enough symbols this cuts off immediately.

Hong Kong Tower doesn’t have a huge collection of symbols but they do look good and distinct. Even with the high number of paylines and the low number of symbols, it’s still difficult to get a meaningful win, resulting in the slot’s High Volatility. Players should be aware of this and use the option to pick a bet between £0.20 and £100 per spin.

As you can see the payouts for every win, even with five-of-a-kind, is very low. This further contributes to its high volatility. It is meant to even out with the use of the Bonus game, which is a special feature.

Just like Ho Ho Tower, Hong Kong Tower does not have a lot of features. The ones it does have are mostly centred around the special Wheel that is enabled when the Bonus symbols appear on the screen.

The base game plays like any standard video slot, with a lot of waiting around to see if something hits. The 99 Ways To Win never felt like a substantial part of the game to me, and as a result, wins were about as sparse as they would have been with regular paylines.

The game gets marginally more interesting during the Bonus Game, which activates when the player has 3 or more Bonus symbols on the screen. The camera shifts up to the top of the skyscraper where we are shown 3 different wheels. The Bonus game starts on one wheel, divided into about 10 sections. Each of these sections has a coin value associated with it, except two.

The second wheel has higher coin values associated with it and 1 Bonus symbol on it. This wheel works the same way. If the wheel lands on the last remaining Bonus symbol it will move to the third wheel, with the highest coin values.

If the player gets 4 or 5 Bonus symbols during the base game, that means they get respectively 1 or 2 extra spins when the wheel lands on a coin value that was already selected.

Although this part of the slot is fun and often very good for the total funds, it did not trigger very often. It’s also a direct copy of Ho Ho Tower, although I think this slot technically came out first. They are completely interchangeable, down to the coin values on each of the wheels.

If you’ve played Ho Ho Tower prior to Hong Kong Tower, you won’t notice many differences. If this is your first of the two, you’ll probably consider it a nice looking but ultimately very simple classic slot. That’s not necessarily a bad thing and I consider the Bonus game a highlight of this game, but it’s also not a glowing recommendation.

I think this game is suited best for people that enjoy the direct coin wins that the Bonus game offers. The only trouble is getting there without running out of funds. I found it to take quite a while to trigger the wheels and when it did, it could just as easily end after only a few spins. In my time playing, I found that I did not make up the funds I needed to get to the Bonus game.

Players can balance their risk a bit by choosing a bet between £0.20 and £100 per spin. The max. win of 3,016x your bet is nice but maybe not high enough to make the risk worth it. Try it with a close eye on your funds and you might get something out of Hong Kong Tower.

Browse casinos with Hong Kong Tower and other slots from Elk. Create an account and try the game for free before making a deposit.

You can play Hong Kong Tower in English, Finnish, Swedish, German and 19 other languages. 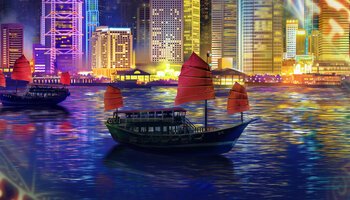