Hook’s Heroes shows us the power of imagination and the benefits of playing big as they entertain us with a special show.

Originally released in 2015 by developer Netent, Hook’s Heroes puts us in the audience as a group of children perform a pirate play on stage. Everything about the slot enforces this idea, with the cardboard cutout card symbols, the clouds on strings in the background and their handmade costumes.

With a 5-reel, 3-row layout and 20 paylines the slot stays close to the classic layout, giving the symbols plenty of room to show themselves off. The game starts with a short but sweet intro animation that gives us the right context. Whenever I activated a feature it would also give a short introduction of that feature before starting it. Big wins, and really big wins, even had their own victory screens.

I really dig this approach as it firmly establishes a theme and a setting. The creators obviously had a lot of fun considering the many small details. Hook’s Heroes is filled with great art that brings to life the idea that these kids got together and made up a show to perform.

The soundtrack is good but I thought it didn’t quite fit the rest of the theme which was a shame. It’s an upbeat song that reminded me of a television show of some kind but that doesn’t really relate to the idea of children doing a theatre show. Still, it keeps the energy high and it was excellent quality.

The symbols are all hand-drawn and great to look at. The lower-paying symbols are made to look like they’re cut out of paper or cardboard. The higher-paying symbols are the different pirates in the play. Whenever these appear on a winning payline they’ll play a little animation which I thought was a great touch.

The Scatter symbols will always animate, even if you only get 1. The other characters only move when they’re part of a winning payline but even then I thought it was great attention to detail.

Hook’s Heroes doesn’t have too many features, and the 3 main ones are exclusive so you won’t get more than 1 at the same time.

As I’ve seen with other slots by Netent, most notably Finn and the Swirly Spin, their listed Low Volatility didn’t really coincide with my experience. I felt the slot gave wins rather infrequently but at the same time, they would be quite substantial. The Scatter Symbols would also appear pretty often, and with only 2 needed to get a random bonus feature, it would sometimes result in a sudden large win. Just something for players to keep in mind!

The different features are interesting and different enough to keep trying them out and seeing which one works best. Getting just 2 Scatter Symbols triggers the game ‘pick a random’, if you get more you get to choose which one you want to use.

I had varying results with each of the 3, so I couldn’t tell you which one is preferable. The Fairy Feature is definitely the most dependable since it adds Wilds to the screen. Meanwhile, the Mermaid Feature is really just the base game but with an increased win amount. Since it doesn’t alter how the wins are achieved at all, I thought this one was probably the weakest.

Hook’s Heroes is a great-looking slot with a ton of atmosphere. I really like the setting the creators established. Everything from the animations to the character design and the background works together to put us in the theatre seat. The only thing I think missed the mark is the soundtrack, even though it’s still good.

The slot has listed low volatility that I already commented on. With the ability to choose a bet between £0.20 and £200 there is enough flexibility to decide how risky you want to play it. With a max. win of 3600x your bet I’d say it could pay off to play conservatively.

If you’re a fan of the way Hook’s Heroes looks, I would heartily recommend Legend of the White Snake Lady, which I think has the same artist. In contrast with Hook’s Heroes, it only has 2 features worth mentioning so if you’re looking for a simple slot it will definitely fit the bill. Meanwhile, pirate enthusiasts might enjoy Ghost Pirates. This is an older game and takes a darker look at pirates.

I really liked Hook’s Heroes. It looks amazing even though it’s several years old now. The gameplay is solid, with a few features that aren’t difficult to understand. The soundtrack kind of misses the point of the slot but still sounds good. It was a great game when it first came out and I imagine it will hold its worth for quite some time.

Browse casinos with Hook’s Heroes and other slots from NetEnt. Create an account and try the game for free before making a deposit.

You can play Hook’s Heroes in English, Finnish, Swedish, German and 20 other languages. 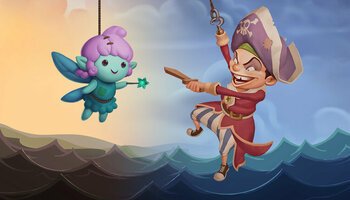