Hooligan Hustle brings to life perhaps one of the most lively parts of British sports culture with this slot that focuses on the violent football hooligans. Players will view the carnage safely from home as they enjoy multipliers, stacked wilds and free spins.

The game was developed and released by Play ‘n GO in 2021, utilising a rather unique cel-shaded graphic style to help set it apart from other competitors. It’s clear where the slot takes its inspiration from and it does so in a grim but rather humouristic way. The game also feels rather frenetic with a lot of movement on the reels and in the background.

The player will be looking at a 5-reel, 3-row playing field that utilizes a total of 248,832 paylines. Behind the playing field, we can see two groups of hooligans flanking the slot, antagonizing each other. The game is animated by having various objects been thrown across the screen as well. If there’s a win, the crowd reacts too.

When it comes to the sound design it’s about what you’d expect. We can hear an original pop-rock song while a random hooligan sometimes offers commentary. The sound effects are integrated pretty well with the overall sounds and don’t detract from the mood. Overall, the soundscape does make it feel like you’re watching a brawl between two groups.

Hooligan Hustle shows that slots can take inspiration from anywhere to fill the reels, as this game uses no generic symbols. Instead, it has low- and high-paying symbols drawing inspiration directly from the topic of the slot. Players can see a number of different hooligans as the high-paying symbols while various items that might get thrown around during a fight fulfil the role of the low-paying ones.

Players will have to contend with High Volatility when playing this game, as the slot doesn’t make it very easy to get big wins. I did notice that getting any wins was a bit easier than that, but often this wouldn’t be enough to make back even a single spin. The slot has an RTP of 96.27% which is slightly above the average.

Players can influence the game and their spending by augmenting their bets. The slot allows players to pick a bet between £0.10 and £100 per spin. There is a maximum win of 10,000x your bet. It is a sizeable jackpot that is a lot higher than the average for a game with this volatility. Nowadays, there are other slots with even bigger jackpots though.

Hooligan Hustle introduces a number of different features that work together rather well. The base game and the free spins mode largely make use of the same features, just in different frequencies.

First, a quick overview of the features found in the game:

The majority of the game takes place on the main screen. I found the free spins mode to be difficult to activate. During my time playing, I only managed to do it twice. The main game is largely the same as the free spins mode. Players can randomly activate the stacked wilds or linked reels. The mystery symbols are a nice addition but only rarely contribute to a win. The Rumble Row can also activate but this is exceedingly uncommon.

Activating the free spins mode gives players a choice. They can choose between 10, 5 and 1 free spins. The fewer free spins they choose, the more modifiers activate on the Rumble Row. This means up to 4 features can activate in a single spin. Since the game doesn’t often grant you access to the free spins mode, I wasn’t able to really find the optimal choice.

Hooligan Hustle looks really good for a slot about a group of men rioting and fighting. The graphics are crisp and clear with their own unique style. The cel-shading works well at making it stand out. There are even various animations that help create a chaotic vibe to the game. I thought the sound design also did a lot to add to the setting.

When it comes to the features, I found them to be quite appealing. I would have liked to see them more commonly but that would probably break the game. When they do appear they can often help contribute towards a win. Staying about even with my funds prove to be possible, but I wasn’t able to end up with more than I started.

I would see this game is perfect for the average slot player. It stays relatively close to the classic slot experience but introduces a number of different features that keep the gameplay fun and interesting. People who want either a more modern or a more classic experience will likely not quite find what they are looking for.

Browse casinos with Hooligan Hustle and other slots from Play'n GO. Create an account and try the game for free before making a deposit.

You can play Hooligan Hustle in English, Finnish, Swedish, German and 30 other languages. 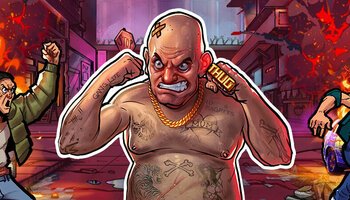