The geniuses of steampunk mean business when they built a heavy-hitting multiplier machine that's clocked in at 2,413x your bet for the max payout. This is a game that can take the edge off a fluffy day with its edgy rig of four rows and five reels.

The experience starts with a deep tune and an eerie heartbeat drawing you inside a well-oiled game that doesn't have others to match it in kind. Players with a taste of post-doomsday life will feel right at home.

Three extra features can descend on the 40 paylines in an effort to give the potential payouts a boost. Additional to the spectacular gameplay is Nolimit City's Winners board, which can be accessed by pressing the golden star on the left side of the reels.

But first things first, the design is as cool as a stokehold of the industry where these things are made.

I make note of the fact that Nolimit City is able to traverse distant grounds between the various slot themes.

They have a game like Bonus Bunnies and Owls and they get you this. If you like this company's games overall, I think this is the most original creation, although there is tough competition in that regard.

Hot Nudge puts you at the controls of a bizarre contraption whose purpose is to spin the reels and juggle with the odds of making a potentially massive payout. This is quite possible, and the multiplier meter in the top right corner lets you know it.

I'll give in that the steampunks on the reel set are still-life, but everything around them is moving. Winning outcomes are annotated by a pulsing light and the extra features are inaugured by the appropriate turn of the mechanics.

Needless to say, the design is fascinating and very much in tune with the device's high volatility.

Hot Nudge has only seven paying symbols, a wild and scatter. Perfect! That means less clutter and more room to see more of the high-paying symbols.

Symbol payout-wise, the mechanical cards' suits are only worth counting when they come on the paylines five of a kind. Any other instance would require a nudging wild in order to pay for the amount wagered. So in that regard, a nudging multiplier wild would be a waste of good news.

On the other hand, the steampunks can pay amounts that are slightly better, which will make a difference when an extra feature crops up.

Starting with the Jack of Punk as the lowest of the high symbols and on to the Queen of Steam and King of Diesel, the amounts that you can make are between 0.3x and 5x your bet.

Sad to say, these figures could have been more robust than this. It would have helped the awesome graphics, but instead, players have to just count on the extra features.

Did I mention that I like this game? It’s very entertaining. Lets me blow off some steam on a steampunk machine with bets that can range between £0.20 and £2.00 for a low stakes game. With the volatility screaming in the red zone, Hot Nudge is a game that has to make many runs before it triggers a big win. The 2,413x your bet question is, how big can an ‘Atomic Win’ get with the help of a 10x hot wild multiplier?

Browse casinos with Hot Nudge and other slots from Nolimit City. Create an account and try the game for free before making a deposit.

You can play Hot Nudge in English, Finnish, Swedish, German and 12 other languages. 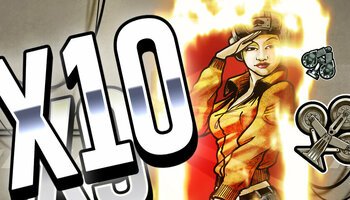