Hot Sync is a quick little slot that isn’t interested in reinventing the wheel or otherwise making any big waves but simply offering a fun game that will help people pass the time. Players can enjoy some simple graphics, and free spins, wilds and expanding reels as its most important features.

This game was developed by Quickspin who released it in 2017. Since the graphics are rather simple but sharp they are essentially ageless, and the game still looks fine. It could have been released today and players wouldn’t be able to tell. The opposite side of the coin is of course that this is because there is almost no creativity at display in this 5-reel, 3-row playing field.

There are a total of 20 bet lines in the slot on which to win, which combined with the larger number of symbols and the features puts the game at High Volatility. The game doesn’t have a meaningful background and the symbols don’t have any special animations. The game moves quickly enough to not get boring but it has little to keep people interested visually.

All of the symbols in Hot Sync are somehow based on old-school slots, given an updated look. They are big and sharp, as well as colourful to keep them visually distinct. Players won’t have any problems spotting wins, including with a nice effect behind the tiles.

Hot Sync lets players pick a bet between £0.20 and £100 per spin, having the risk stay the same but potentially awarding players more or less. The maximum win in the slot is 3,075x your bet, which is quite a win but not likely to hit.

Hot Sync is a simple slot with very little creativity on display. Still, the game holds some interesting features that change up this standard slot. The features all appear often enough to feel like a part of the game, with even the free spins mode activating frequently.

Even though it takes some diving into the features, much of it does in fact revolve around synchronized reels as the name of the slot implies. It does require some steps to get it to show up though, which might be why this isn’t immediately obvious. In fact, I remember other slots that have every reel mirrored every spin, which deserve the name more than this game.

However, there is a synchronized feature and it revolves around the Hot Sync symbol. When it appears during the base game it will activate the re-spins mode. During this mode, all Hot Sync symbols will turn their reel into a synced reel, making these reels show the same symbols in the same place.

Hot Sync symbols can appear on all 5 reels. Players receive 1 re-spin when 2 Hot Sync symbols appear on the screen at the same time, and an additional 1 if an extra symbol appears. This continues until either no more symbols are added or the entire playing field is filled with synchronized reels.

The Free Spins mode is triggered when there are 3 Bonus symbols on the screen. Players always receive 8 free spins that can’t be retriggered. During the free spins mode, Hot Sync symbols have the same functionality as during the re-spins feature, and they make it more likely for Wilds to appear on that reel. ‘Hot’ reels stay hot for the entire free spins mode.

I think the idea of the synchronized reels is fun but it required a few too many steps to actually activate and be a part of the game, making it essentially invisible for most of the time. I had to actively look out for it to even recognize when it was happening.

Hot Sync is a very basic slot in a lot of ways and will not blow many people away with its unique design or enticing setting. The game is perfect for those that are looking for something simple and accessible, that is easy to get into and start spinning.

The features do play a big part in the game, even though the features that appear the most are not related to its name. Getting synchronized reels is weirdly a lot harder than activating the free spins mode, for example. Wilds are also rather numerous, which is a good thing.

I found the game to be pretty nice as a standard 5-reel, 3-row slot that kept my funds relatively stable around the starting point. The volatility does require players to keep a close eye on their win ratio as it can quickly turn sour if the bets are too high.

Browse casinos with Hot Sync and other slots from Quickspin. Create an account and try the game for free before making a deposit.

You can play Hot Sync in English, Finnish, Swedish, German and 23 other languages. 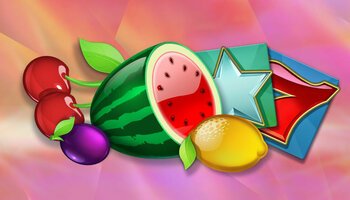