Online slot Hotline sees some unlikely heroes, fast cars and a synth-wave soundtrack playing in the background. Oh, the 80s nostalgia is real and playing this game, feels like you are reliving your own version Miami Vice to much delight.

With speeding cops in less than glamorous suits and mobile phones that weigh a brick, Hotline has 30 pay lines with reel re-spins and expanding wilds to capture your attention. Created by Swedish software developer NetEnt, this game is bound to thrill a myriad of casino players. It has all the elements of a sexy yet sassy video slot game, which should appeal mostly to players who have lived through the 80s and 90s. The nostalgia feels!

You know by now that NetEnt is very successful in creating class act slot games and this release is no exception. After all, this is a software provider that has scooped up numerous awards throughout the years and setting the benchmark high in terms of graphics and entertainment. I am quite a fan of NetEnt and I rarely have a bad thing to say about this company as they thrive on creating awe-inspiring games that tell a story.

In this game, NetEnt succeeded in capturing action, speed and 80s nostalgia in one go, spread over five reels and three rows. NetEnt also introduced its latest feature Bonus Bet in this game.

The Bonus Bet can be manually activated to increase the chances of landing Re-Spins and Expanding Wilds between two and three rows. When this happens, it boosts your prospects of covering all the reels in their entirety with Wilds.

With an RTP of 97.04% and bets starting from as little as 15p per spin, get ready to join the classy characters in this retro-themed TV slot game. Dust off your old cassette player, gel your hair back and get ready to cruise the mean streets into the sunset.

With the heat emitting from the sunset in Miami as a background and the retro chill soundtrack belting in full swing, there are a total of eight symbols on the reels. The Lady with the cell phone is by far the highest-paying icon in this slot game, while the other two male protagonists come second in the highest value.

From what I gather, the Lady is actually a criminal who is being chased down by the two male detectives. She has stolen necklaces, bracelets and crowns, which are ironical, the lowest paying symbols in this game. Like most slot games, you might have to assume the story behind the slot game.

There is also a Scatter which can activate the Free Spins feature, while the car icon acts as a Wild. One thing that you need to pay close attention to is the previously mentioned Hotline Bonus Bet since Wilds can trigger potential wins. You can opt to trigger up to three Hotlines, but be aware, that the bet amount will also increase.

Each time a Wild drops onto a Hotline, it will spread to encapsulate an entire reel. When this happens, you are rewarded with a free re-spin, while the expanding wild stays locked into position to much glee.

If an additional Wild drops onto a Hotline, you once again receive a re-spin. This process keeps on going until there are no expanding Wilds anymore.

I was disappointed to learn that no scatters can land on the reel during the bonus round and free spins cannot be re-triggered. This is an incredibly unfortunate situation, to an otherwise great game.

Slot game players who are fans of the eighties will undeniably feel right at home when playing Hotline. Hitting the reels and embarking on a high-speed car chase can be personally gratifying and satisfying at the same time.

The Hotline Bonus Bet has many benefits to it, and I can evidently see its allure, especially as an addition to the background story of the game. Since it makes room for expanding Sticky Wilds that can lead to significant wins and trigger free re-spins, I found myself partnering up with the two male cops on this wild adventure.

With no dangers in sight except to your bankroll, put on your sunglasses as you whizz around the streets of Miami. This is a high-speed car chase you’ll want to join!

Browse casinos with Hotline and other slots from NetEnt. Create an account and try the game for free before making a deposit.

You can play Hotline in English, Finnish, Swedish, German and 20 other languages. 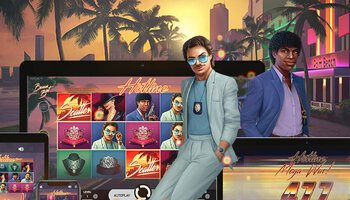