I can see how a haunted house can be a House of Fun, especially if it comes with three bonus features, 30 paylines and animation that can make ghouls and gargoyles spring into life.

House of Fun is a famous game by Betsoft. I don't think it was the title that captured the imagination of slot players, but the entire package. In my experience with the game, I had made a few nice runs filled with winning outcomes and punctuated by bonus features.

The game is able to bring consistent payouts that for the most part shoot below the amount of the bet, however, I've had multiple medium payouts and few consisting of high-paying symbols falling in four payline positions.

In this respect, House of Fun truly plays like a medium variance slot, so if you are looking for a high-potential game you may want to look for another game, but if fun is what you are after, then the bonus features and the character of the game will definitely suffice.

The game begins with a short animated movie about Paul, Jane and their dog going astray into a creepy mansion. The door opens, they enter to get help for their stalled car but only to encounter paranormal events and oddly hosts.

This is good enough of a premise for the type of art and animation Betsoft is known for. The symbols are well-drawn and can grasp the identity of the game, but I have to say, some of them aren't too pretty to look at.

The three men who are residing at the mansion are nothing to marvel at, but you won't see their creepy grins and smirks because these are the high-paying symbols of the game.

At any rate, I generally like the choice of symbols and the musical composition that is fitting for any haunted House of Fun.

House of Fun is about scaring the wits out of Paul and Jane, by landing winning outcomes, of course. But if you really want to see them quivering you should bide your time and your balance for the two pick-me bonus features.

If there is one thing that I dislike about Betsoft games from this period (2010s), it is the limited potential of the free spins bonus.

House of fun has it, however, it is my least favourite bonus of the three and the game can't trigger either of the two extra features.

Nevertheless, if you land three Jack in the Box symbols you get a guaranteed stacked wild reel in the middle.

This is a pick-me bonus that lets you select from three available symbols while watching the comical performance of the man in a top-hat. The good part about this bonus is that you can hit multiple cash prizes before hitting the 'Collect' option.

My favourite part of the game and one that I only got to play twice. The desired outcome is to select a door that has a Jack in the Box as many times as you can before you enter the darkness and carry off the aggregate winnings.

Note: this bonus has the highest payout potential unless House of Fun decides to treat you to multiple retriggering events in the free spins bonus, whose single iteration doesn't quite justify calling it a bonus.

When it comes to the payouts, House of Fun has a rarely unique payout structure. If you refer to the image you will see that there isn't a huge gap between the different symbols. All in all, there are 10 paying symbols, including the one for the Free Spins bonus that can pay 60x your payline bet for three of a kind.

On the other hand, the two most valuable symbols of the game can pay 150x your payline bet for five of a kind, which translates to 5x your bet. There are many games by Betsoft where the high-paying symbols top between 15x and 20x your bet, so House of Fun isn't impressive in that regard.

Again, it is notable that you can win your bet or more if you land three or four symbols for seven out of ten symbols.

There are two crucial differences between this game and the other similar games by Betsoft. House of Fun has a much-higher RTP (94.96%) and a payout structure that makes a balance between low and medium payouts that tend to be consistent.

If you decide to play the game, it would be for the purpose of landing the bonus symbols that trigger either of the pick-me games because this is where you can hit a lucky streak and get a hefty multiplier to your bet.

Overall, I can recommend the game but from this point in time, it looks more dated than I would've wanted.

Play House of Fun for free

Browse casinos with House of Fun and other slots from Betsoft. Create an account and try the game for free before making a deposit.

You can play House of Fun in English, Finnish, Swedish, German and 21 other languages. 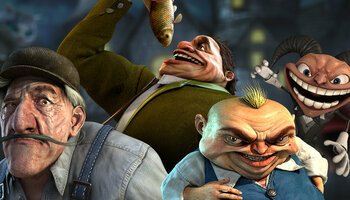