Huge Catch Dice is the alternate version to a slot that came out only a little while earlier in 2020, using dice as symbols instead of the original ones that were part of the first version. The game still features Wilds, Free Spins and a Bonus Game.

If you’re familiar with Huge Catch by Mancala Gaming you won’t need to read this review as you’ll already know exactly what you’ll get. The game is the exact same, with a 5-reel, 4-row playing field and 25 win lines. The graphics are also the same with the only exception being that all the symbols are now projected onto dice.

I don’t think I’ve ever seen a slot use the core design so blatantly with the only change being that there are dice now with the symbols on the side, instead of just the symbols. I didn’t notice anything else in terms of graphics or sound. This version also comes with a Pays Both Ways feature, meaning the wins count from left to right and vice versa.

If you haven’t already played Huge Catch you can read on. If I’m honest I wouldn’t recommend this game as it is such a blatant copy, as well as making the original symbols smaller to fit on the side of the dice. Only people who really prefer dice symbols over any others will likely prefer this game, but I can’t imagine that’s going to be a lot of players.

As mentioned above, the game uses the exact same symbols as the original slot but with dice. These don’t offer a special functionality and when there is a win, the symbols are shown in their original size, so without the dice.

Players can pick a bet between £0.25 and £22.25 per spin, which helps them balance the risk in this Low Volatility slot. I found that my funds started off staying pretty stable but soon after started to trend downwards, with no big wins to recover with. As a result, the game feels like its just slowly losing your coins and giving you no opportunity to win them back. The max. win of 2,555x your bet is a nice incentive but likewise it didn’t feel like it was something I had a shot at.

The payouts are exactly the same as the original game so there is no reason to choose this slot over the other one either.

The game has a small, select number of features that amplify the gameplay without completely dominating it. The way the game plays is excellent for new and casual players that are looking for something relaxing while still changing up the gameplay somewhat.

The features included here are:

Again, these features are familiar to anyone who has played Huge Catch and they’re pretty standard features in general as well. Still, I found each of them to do a good job at helping create some wins or at least changing up the gameplay.

The Pays Both Ways feature is pretty obvious during both the base game and the free spins mode. Players get to see the direction of the win due to the symbols lighting up and showing the win line. I would often get more than a single win on a spin to explain the low volatility but the payouts would also be rather low.

The wilds were frequent as well and a big help in getting wins. Most of the wins I did get were made with help from a wild. Unfortunately, as the payouts for shorter wins is quite low that was usually not enough to make back the spin itself.

In my experience, the Bonus Game triggered the most often. It would only require a single crate on the screen to activate, showing the player 5 crates and allowing them to pick 1 of them. The crates hide different coin wins as well as free spins. Both get awarded immediately.

The Free Spins mode is the same as the base game, with no extra features activated at the same time. Players don’t have any bigger opportunity for wins during this part of the game. I found that the Free Spins are mostly triggered due to picking the right crate. Even though it’s also possible to get 3 or more Free Spins symbols on the screen to start this mode, this never happened for me.

Where Huge Catch was a nice surprise from a small developer, Huge Catch Dice feels like a very simple and quick copy of the game that only came out mere weeks before. There is really no reason to go for this slot except if your favourite place to play doesn’t offer it, or you are a huge fan of dice symbols.

The gameplay itself is solid, just like its predecessor. The background has a nice cartoony style while there are some subtle animations to give it some movement. There aren’t really a lot of things to see in the playing field itself, mostly because the dice make it all so small.

If you want to play something with low volatility but the gameplay of a classic slot and some easy to understand features, you can’t really go wrong with Huge Catch Dice. I would recommend you play the original since it just looks slightly nicer with the bigger symbols.

You can play Huge Catch Dice in English, Swedish, Spanish, Italian and 4 other languages. 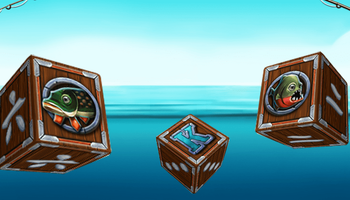