Board the minecart and head deep down into the caves with Hugo Carts. Our favourite troll, Hugo, is back and with him is his wife Hugolina and the meanie Scylla in this 5-reel slot with 1,024 dynamic payways.

When he crossed over from video games to slots, Play’n GO made sure to give him quite the spread of games and this is the 5th release bearing his name. It’s possibly also the most interesting and entertaining of the bunch. OK, heading down to the caves looking for gold might be an overused slot theme but Play’n GO has made this game quite exciting with the respin features in the base game.

There are some gorgeous designs, cheeky animations and an adventurous soundtrack that will keep you on your toes.

During the base game, any character that lands on the reels will award a re-spin with a special feature. Multiple characters can appear also in one spin, in which case the features are stacked for the re-spin.

At the start of the bonus round, a character will be randomly selected between Hugolina, Hugo and Scylla. Every spin in the bonus round will have the same properties as the character in the re-spin feature. If another 3 or more scatters land on the reels the bonus feature will be retriggered. This can only happen another 2 times until all the characters have been chosen.

At any point during the base game, Don Croco might make an appearance. He will go through the reels and randomly drop 2 dynamite scatter symbols. This means you are just 1 scatter away from triggering the bonus round. Good ol’ Don Croco.

This slot might be all about the Hugo universe but it definitely feels like a highly volatile Play’n GO slot. Don’t be fooled by its cartoonish looks, the engine underneath is cut-throat and it may make a serious dent in your balance.

This high risk does come with a 25,000x max win but the chances of hitting this are 1 in a billion spins. The high rewards are most likely in the bonus round which isn’t the easiest to get to. The first time around I had to wait for over 250 spins before I hit the 3 scatters.

The base game doesn’t offer a lot of rewards, even when the characters come round for a respin feature. Most wins I was registering seemed to hover around the 5x-7x because of the low symbol values. The yield for the bonus game was a disappointing 34x.

That’s high volatility for you, but I honestly couldn’t see the potential for big wins in this game. At one point, in one bonus round, I only managed a 4x win which is shocking. The symbols just weren’t landing right, and this was my experience throughout. So all in all, Hugo Carts is a very enjoyable game to play, with interesting mechanics and great design choices. Just keep an eye out on your balance as with its high volatility it may be drained quite quickly.

Browse casinos with Hugo Carts and other slots from Play'n GO. Create an account and try the game for free before making a deposit.

You can play Hugo Carts in English, Finnish, Swedish, German and 30 other languages. 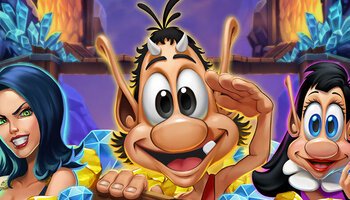