Hugo Goal is a humorous take on the most popular sport in the world. No one can be out on the field playing or watching matches on the telly constantly. With the Hugo Goal slot we can perfectly fill that remaining time!

Today I am taking a look at this game to see if it’s a glorious bicycle kick or a disappointing own goal.

Hugo Goal is a slot made by popular developer Play ‘N Go, who is known for coming up with unique ways to make their games more appealing. You can definitely count me as one of their fans, not just for their original ideas but also for their attention to detail.

The slot consists of a 3 reel and 5-payline field overflowing with football regalia and a motley crew of characters you might find on the football field in a magical forest.

The main character Hugo is a troll who loves football. He is in the game a fair bit and is easily recognisable, especially because he has his name on his T-shirt. Both he and his fellow football enthusiasts look great. Each symbol is drawn with a lot of detail and in distinct styles so they are easy to tell apart.

Hugo is also your biggest supporter. Sometimes you’ll even get to control him in the Bonus Game, trying to get the biggest win. Speaking of which, that might result in a massive 800x your bet and definitely something to shoot for!

At first glance, the game is pretty simple with only a 3 reel and a 5-payline playing field. Play ‘N Go did add enough features to keep it interesting in my opinion without losing track of the core appeal.

In total, you’ll find 9 different symbols. The top four symbols are 1x3 sized, meaning one symbol can take up between 1 and 3 spots on a single reel. You need to land 3 matching symbols on the payline to get the following wins

The remaining symbols are smaller and only take up 1 spot each:

The game has two features that alter the classic slot experience:

I was charmed by the way Hugo Goal looked. It’s a little silly but it never sacrifices gameplay for looks. It keeps to the Play ‘N Go trend of putting a lot of love into each slot they make.

If you asked me what a football soundtrack should sound like I couldn’t tell you. The people who made Hugo Goal had an idea. They chose an uptempo pop song with a nice beat to go with the game. I found it to be a good fit without being obnoxious.

The Hugo Goal slot is a nice, fun game that takes a beloved sport and turns it into a great way to pass the time. It offers players quick play with regular wins which in my mind contradicts the high volatility. I’m not complaining though!

With only three reels and five paylines the slot stays accessible. Because there are ‘only’ two bonus features you also won’t get overwhelmed. The regular extra features like Autoplay and Fast Play mean that you can edit your experience a little to your preference.

I had a good time playing the game. You don’t even have to be a football fan to enjoy it!

Browse casinos with Hugo Goal and other slots from Play'n GO. Create an account and try the game for free before making a deposit.

You can play Hugo Goal in English, Finnish, Swedish, German and 30 other languages. 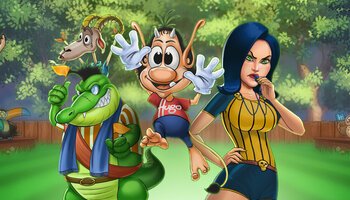 I tried this because of World Cup but didnt win anything and features were not that interesting. I think that all Hugo-related games arent that good. Dont waste your time with this one.

Design is okay, but there is a lot of more interesting games. Cant believe that RTP is as good as they say (96%)