Once you see Ice Breaker play, it will be hard to find a better conceptual representation of that famous phrase. This is an online slot where your winning outcomes break the ice and free up the fish that's inside.

You can extrapolate that on many levels and feel at home with the idea. What I like the best, however, is that the game has a standard reel-set of three rows and five reels, yet the number of ways to win is 243.

Few spins in and I am liking the gameplay even more. It looks like Push Gaming did not waste any pixels on unnecessary background art. The entire screen is taken up by the reel set. I tried Ice Breaker both on my computer and mobile and in both instances it looks and feels like a peaceful sunny outing on a thawing lake.

Besides one bonus feature and a wild symbol, Ice Breaker comes with the collapsing symbols payout system where winning outcomes are replaced by a new set of symbols. I've had three and four consecutive winning outcomes a number of times and each one hooks a win multiplier of 1x which makes this cute little game a decent online slot machine.

The graphic design isn't anything out of the ordinary really, but Push Gaming has done it right by drawing up a set of sleepy fishes in various bright colours. Each fish symbol is encased in a transparent block of ice - hence the name of the game. When there is a winning outcome that involves fish of the same kind, the ice breaks and there is a quick flash of light before a new symbol drops in the emptied positions.

Design-wise the game is fine and the gameplay can get dynamic, especially with the help of the collapsing reels, but there really should have been a better soundtrack. Players who want to have an immersive experience in an online slot will be at a loss once they realize the sound effects are nothing but footsteps over frozen snow and few short exclamations. And that's it really.

Here is a game whose paytable is split right down the middle but with one notable caveat: none of the low paying symbols (10-card to ace) can return the full bet.

I understand that there is the collapsing/cascading wins system at play here, but landing five matching symbols and getting 0.8x your bet from that outcome is just too much too little for me.

It would have been quite sensible to enable at least 1x your bet for a win consisting of five matching card symbols, but not in this game. The cards pay between 0.2x and 0.8x and that is that.

The fish are slightly better when it comes to wins for three of a kind. These outcomes can pay between 0.4x and 1x, so if you are expecting to win a decent amount that's at least 5x, 6x or 10x your bet from a single spin, Ice Breaker is not the game for you.

The bottom line is that players should see the game for what it is. Winning outcomes in the base game can turn up decent payouts (at least double your bet) but only with the third or fourth collapsing win.

Despite my complaints about the above section, I still enjoyed playing Ice Breaker because it doesn't leave you hanging without a win for too long. The bonus feature can give your chances for a bigger win a boost, just don't expect anything big.

After all, Ice Breaker has a low maximum payout potential of 810x your bet so even if you get as close as half of that amount with a bet of 50p, the kickback from that string of payouts would be around £400.

Browse casinos with Ice Breaker and other slots from Push Gaming. Create an account and try the game for free before making a deposit.

You can play Ice Breaker in English, Finnish, Swedish, German and 16 other languages. 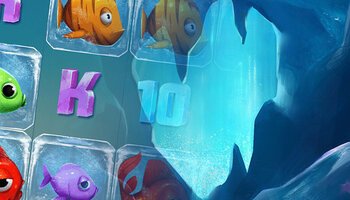