Breaking the ice can be really hard regarding things people do for the first time, but not here. This Yeti-powered slot by Nolimit City lets you release the wildlife on the reels with the push of the spin button, for a chance to win cuddly cash prizes of up to 8,820x your bet.

I was drawn to Ice Ice Yeti because I am a Yeti buff. Yes, someone can be a Yeti buff and be as realistic about it as some people are real about spotting a UFO during their lifetime. On my quest to absorb Yeti-related knowledge I've learned the sound of the call that the alleged hominid makes when in distress, as per the saying of locals in Nepal in the past century.

But that's enough about the real Yeti. The reel Yeti, on the other hand, got me interested with the rather towering potential payout amount and the style of the gameplay. I like slots where tiles are broken up in order to release more ways to win, and this is one such game that, by the way, also comes with fun-loving gameplay and a set of extra features.

The title makes clear what the game is all about right from the get-go. Any spin of the reels can result in one or few of the iced tiles breaking up and releasing extra paylines.

Ice Ice Yeti can turn into an event where you can actually get to see the elusive snowman. He hides behind the wild symbol and comes out roaring in your face - but he means well, as his wild symbol sticks to the reels for respins and potential wins.

The graphic design is marked by cool, glossy images of cards and animals and a moving and shaking permafrost, which can give in or recede, depending on the events on the reel set. In addition to the dynamic gameplay, I've been enjoying the chipper sound theme.

If I were ever to assemble a group of adventurers for a Yeti-finding expedition, I guess this would be the song that stays on repeat, per captain’s order, until someone chucks me off the first precipitous cliff and hollers “good riddance - there is no Yeti!”

Either one of the extra features can increase the number of ways to win, but I especially like the first Ice Ice Respins feature because it can remove a greater number of icy tiles, if not all.

In the event the reel set gets a layout of seven rows and five reels, Ice Ice Yeti unleashes its maximum 16,807 ways to win.

For those who don't like the cold season, the game offers bets as low as 10p per spin. This enables anyone to catch a glimpse of the snowman and perhaps even get an adjacent reel payout of more than five symbols.

The high-paying symbols are called 'Rascals' and are represented by snow leopard, fox, bear and red panda cubs. Payouts for these range between 2 and 25. For example, a bet of £1 gains £0.80 for five fox cubs.

Regular payouts that are triggered without any features are kind of on the low end, which reflects the high variance, but keep in mind that wins of more than 15 matching symbols are possible.

Also, Ice Ice Yeti can turn up multiple wild symbols on the same spin, which I find to be the ticket to the top of this mountain.

The balance is quite delicate in Ice Ice Yeti. The paytable spells out paper-thin payouts but the capacity of the payout system says something completely different. It is a high variance game, after all, so those who can muster the patience and make the ascent, the Yeti will make more than few cameos in order to expand the reel set. In terms of playability, I can’t find any fault - it’s definitely a fun game to play.

Browse casinos with Ice Ice Yeti and other slots from Nolimit City. Create an account and try the game for free before making a deposit.

You can play Ice Ice Yeti in English, Finnish, Swedish, German and 12 other languages. 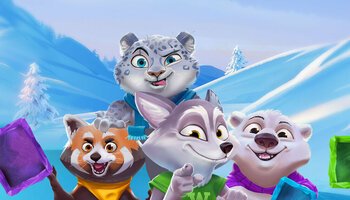