Ready for a trip to Vegas via the North Pole? Then head over to Ice Joker for a classic slot with a glacial theme. Here you will discover a classy 5-reel, 3-row slot with 20 paylines.

With a concept which very much resembles the hit movie Frozen, the Ice Joker brings vintage Vegas-style fruit slots into the 21st century. This is done thanks to crisp graphics and fresh FX.

There is nothing wintery about the soundtrack. In fact, it reminded me of the music heard in the background of Reactoonz (another Play’n GO slot). Having said that I felt it complemented the theme nicely. The colour palette in Ice Joker is incredibly soothing and coupled with the icy sounds, it makes for a relaxing and enjoyable experience.

But that’s not all. Ice Joker has a few surprises up its sleeve which will inject some excitement into the gameplay. With expanding wilds and glacial bonus rounds, Ice Joker is yet another solid slot from Play’n GO.

All symbols look gorgeous, Even though they are symbols used over and over again, the dusting of ice on them gives them a fresh new look. Whenever a win is registered there is also a sparkly animation on all tiles and a crisp chime in the background.

Then there are the lower-paying symbols which consist of juice, frozen fruits. The plum and the grape will yield 2.5x and the lemon and cherry yield 1.5x with a combination of 5 on a payline.

So there aren’t as many features as we have come to expect from Play’n GO games but the ones there are can be quite lucrative. These can also be seen in the quick introduction before you start the game.

However, on any of these spins, another Ice Joker might make an appearance thus continuing the loop of wilds.

The wheel will be triggered one scatter symbols appear on reels 1, 3 and 5. When this happens the player will spin a wheel where they will win anything between 1 and 7 Ice Jokers. Once the number of Ice Jokers is decided the spin starts and an Ice Joker will be randomly placed on the reels to start the Ice Joker loop of 3 spins. That means that if you land on, say, 5 Ice Jokers, you are guaranteed at least 15 free spins.

I say at least because during this bonus round there are other Ice Jokers that might appear and each one will increase the spin count by 3.

Ice Joker has a theme which will keep old-school slot lovers happy. But will also appeal to players who prefer more modern-style slots thanks to its fresh design and contemporary bonus features.

This slot is classed as having medium variance and this was certainly my experience with it. I did find the bonus round really hard to get into. However, with the Ice Joker feature, I was able to score a few good wins averaging around 10x the stake. If you get more than one Ice Joker on the reels then the wins might also go into the 20x region.

When I did eventually get into the bonus round the first time (winning 2 Ice Jokers on the Winters Wheel) was a bit disappointing and only paid out 15x. But when the second bonus came round and I received 5 Ice Jokers on the wheel, I managed to hit 396x.

I’m assuming that is why the volatility is set to medium on this slot. I can only imagine the kind of wins possible if a player does land on the maximum of 7 Ice Jokers on the wheel.

Browse casinos with Ice Joker and other slots from Play'n GO. Create an account and try the game for free before making a deposit.

You can play Ice Joker in English, Finnish, Swedish, German and 30 other languages. 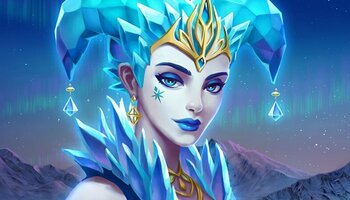