Ice Pirates takes the classical pirates and instead of having them sail the tropical seas of the West-Indies, they roam the icy waters of Antartica! This game features Free Spins, Wilds and Multipliers to help its players.

To start with, I’ll offer a warning that the game is currently no longer playable. This isn’t due to the game being taken out of the rotation but rather that the game is only available through Flash. Since Flash has been decommissioned, it’s no longer feasibly possible to play Ice Pirates until it is transferred to HTML5. While it’s technically still possible to use Flash on your computer it’s highly recommended you don’t do this, as it is no longer updated and any security gaps will not be fixed.

Ice Pirates was developed by Endorphina and released in 2014, making it one of the older slots by this studio. The game looks rather odd, with the design of the characters being especially jarring. The girl has a small face and giant hair, while the lead pirate is seemingly malformed and the bearded pirate looks halfway in between normal and a cartoon. The whole style felt really off to me, but it did give it its own appeal.

When it comes to the 5-reel, 3-row playing field it’s mostly filled with generic card symbols. These are drawn to look like they’re cut out of ice to fit the theme but they are still simple card letters. The high-paying symbols are the different characters as well as a few items you might find on a ship used by ice pirates.

The sound design is on par with other Endorphina slots from the time, meaning there are some generic sounds that play whenever the spins are started or when there’s a win. These don’t fit the theme at all. Only occasionally do you hear anything that sounds like ice or snow.

The symbols in Ice Pirates are drawn to look rather cartoony but as I mentioned before, the style is seemingly all over the place. The female pirate looks like it was rendered in 3D while the other two resemble hand-drawn art. The style is also completely different, which makes it look rather jarring.

The other symbols, both the different objects and the card letters, look a little better. It seems that the artist just wasn’t that great at drawing people. There are some animations when the symbols fall on one of the 10 paylines, but these are brief and mostly involve some simple movements. Still, I appreciate the effort and all the symbols are animated.

Even though the game is getting older, the features help it stay relevant a bit better than the graphics do. Where the gameplay is largely pretty standard it also offers enough excitement to keep the player engaged.

Obviously, most players will already be familiar with these features and won’t need much explaining. They work almost exactly like they do in all other slots, especially in the various Endorphina slots that were released around the same time.

The main feature is the Wilds, which appeared semi-regularly during my time playing the game. The slot has a Medium Volatility which fit my experience rather well. Wins aren’t that common but when they do trigger they’re big enough to make back a number of spins. As I played, my funds stayed relatively stable. I can’t say it was terribly exciting gameplay though, with just a series of spins that were sometimes enhanced by the Wilds.

The Free Spins mode was a lot less common but occasionally turned out pretty well. It triggers when the player gets at least 3 scatter symbols on the screen. Once this happens, the player receives a number of free spins to play with.

I would advise players to mitigate their risk somewhat as they get started to get a feel of the game. They can do this by choosing a bet between £0.10 and £100 per spin, making the game more or less volatile as they go.

All in all, the features are simple but effective. They don’t change the core gameplay too much but the way it plays stays consistently good. Don’t expect any big wins, with the max. win of 1,000x your bet not the highest jackpot, but it’s still a nice incentive.

Ice Pirates is an early Endorphina slot that resembles the other games that were released around the same time a lot. The game includes some simple features that do exactly what you expect them to do. This slot is perfect for beginning players as it introduces these features without making things complicated.

If you’re a more experienced player, or you played Ice Pirates when it was first released, you might find it a bit outdated. The graphics definitely did not keep up with what is more commonly available now and the few features might be a little too sparse. If you enjoy something with a bit more engagement, Ice Pirates might not be the game for you.

Still, I had a good time playing this game and it does what it has to do. Over time my funds stayed relatively stable. Even if I didn’t make a profit, my coins did give me a lot of playtime so it’s a great game for people that want to play a slot to pass the time.

Browse casinos with Ice Pirates and other slots from Endorphina. Create an account and try the game for free before making a deposit.

You can play Ice Pirates in English 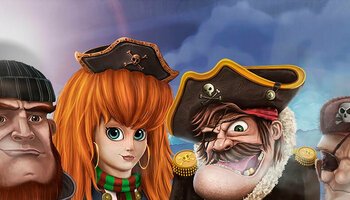