Scale the unforgiving Arctic mountains with Ice Wolf from Elk Studios. A hostile northern tundra is the setting for this 2019 release but will players give this title the cold shoulder or be positively howling for joy? Let’s load the game and find out.

With a vikingesque tint, Ice Wolf is set against a backdrop of a frosty mountain range. Your mission - if you choose to accept it - is to climb to the top of this treacherous mountain and arrive at the hallowed Ice Wolf Peak.

Described by Elk as a ‘traditional slot with modern features’, Ice Wolf joins fellow frozen-themed friends such as Mystic Wolf from Rival, Penguin Vacation from Playtech and Arctic Magic from Microgaming.

Representing bravery, loyalty, protection and wisdom to Norse people, wolves were also symbols of chaos and destruction. Fitting perfectly with the theme of Ice Wolf, our protagonist both gives and takes without prejudice.

For 6 symbols on any payline, payouts are as follows:

The 6x6 reels of Ice Wolf reels are chopped into three distinct sections with only three bottom rows active at first. The top row and three frozen middle rows become active bit by bit when wins thaw the ice, melting to create more ways to win. All wins trigger the respin feature, continuing for as long as your winning streak.

Ice Wolf brings you a standard of 729 ways to win, increasing to 74,088 once all reels have thawed.

Every reel in the top section spins independently during each spin, halting only when a multiplier, wild or +1 Spin symbol lands in place. The landed symbol remains sticky throughout possible respins but is only active once the ice has cleared.

In contrast to the barren landscape, Wolf Ice comes fully loaded with respins, multipliers and wilds.

Respins end when no new respins are landed, either from spinning winning combinations, new Ice Wolf symbols or sticky +1 Spin symbols, or when players land a maximum possible win.

The top section contains all the multiplier symbols: 2x, 3x, 5x, 10x and 50x, +1 Spin symbols and wilds. Values of active multipliers are cumulative and multiply every win, regardless of which reel the win occurs on.

The Ice Wolf symbol is only active when it is not encased in ice. This symbol springs into action after a payout, from its landing position and clears all the ice to right to the top of the middle section. A single respin is granted when one or several wolves appear on a non-winning spin.

Elk has successfully created a world that is completely whole, right down to the fantasy-like bed music and tight sound effects that bristle with realism and vitality. Ice Wolf is a slot with atmosphere to spare.

While the theme is solidified by expert graphic touches and commitment to both music and sound effects, the features, although plentiful do little to elevate Ice Wolf’s status to the leader of the pack.

The grid comes in funky dimensions making it awkward for mobile play and the symbols are generally over-detailed, causing a fair amount of squinting on my part when playing on my phone.

Sadly, here’s a slot that didn’t have me invoking the spirit of the Ice Wolf itself but unfortunately, left me feeling a little cold.

Browse casinos with Ice Wolf and other slots from Elk. Create an account and try the game for free before making a deposit.

You can play Ice Wolf in English, Finnish, Swedish, German and 19 other languages. 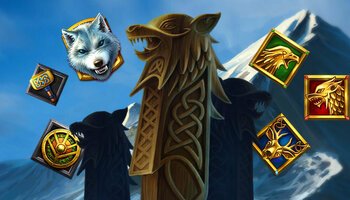