Illuminous is the neon-soaked game that brings to life electric graphics and powerful energy to see if we get to shed a light on some big wins!

This slot was developed by Quickspin and released in 2015. By not using too many digital and graphical tricks, the game continues to look good as the symbols are sharp and focused. Unfortunately, the graphics are also pretty uninspired with mostly high cards and different gems to fill the reels.

Speaking of reels, the game’s playing field holds 5 rows and 3 reels. With its 20 paylines, Illuminous doesn’t seem interested in spicing things up too much when it comes to the gameplay. However, the features that I’ll discuss later will set the slot apart.

The game reminded me of similar slots like Inferno Star by Play ‘n GO and WiXX by No Limit City. They combine striking, neon images with rather simple gameplay. Usually, the games have some special feature that sets them apart and in that vein, Illuminous is the same.

Concerning the sound, the game has little to comment on. There is a soundtrack that plays as the reels spin but it’s not a very interesting song. The rather mellow, slow-paced music didn’t feel like it fit the rest of the game.

The symbols in the game are easily distinguishable but not very original. The high-paying symbols are gems that vary in shape and colour. Meanwhile, the low-paying symbols are the standard card symbols which don’t have much work done.

The game has a Medium Volatility that translated well to my time playing the game. Because of the features that Illuminous introduces, the wins weren’t very frequent but they did compensate for what I used to spin with. Players will have the choice to pick a bet between £0.40 and £80 per spin.

Illuminous has a few features that aren’t too original but they do change up the gameplay a little bit. Players that enjoy a classic slot experience will likely still get a kick out of this game since it doesn’t alter the game too much.

The Wilds and Free Spins act as normal, with the free spins mode granting the player 5 free spins when it starts. Additional Bonus Wild symbols may add additional free spins!

The Bonus Wild aspect of the game puts a slight twist into the Scatter Symbols you’d find in other games. When 2 Bonus Wild symbols appear on the screen at the same time they trigger a re-spin. During this re-spin, the 2 reels on which the Bonus Wilds appeared will become Hot Reels, denoted by the bright colour showing up behind the symbols.

A Hot Reel, both during the re-spin and during the free spins mode, is simply a reel where Wilds will show up more often. They’re not guaranteed to show up but they will more frequently appear, making it more likely for them to be part of a winning payline.

All in all, the features are simple but play a big part in the game. Normal Wilds showed up regularly and there were frequent Re-Spins. The Free Spins mode triggered a little less often but still enough to feel like a part of the game and not something that never showed up like in other slots.

Illuminous is a fun but simple slot that gives players a classic game experience spiced up with modern graphics and an interesting feature. The Bonus Wild symbols showed up often enough to make an impact on the game and the fact that there are different effects depending on how many appeared helped in keeping things interesting.

The Medium Volatility meant a steady but spaced out supply of wins, that weren’t always enough to compensate losses but generally kept me playing for a lot longer. The max. win of 404x your bet is simply low when compared to other slots.

Winning paylines paid out pretty low, which required longer or more paylines to make a profit. Considering the Hot Reel feature and the rather frequent free spins, they helped compensate for that.

If you’re a classic slot player that wants to update their experience a little bit, I would recommend Illuminous! Players that prefer very modern games with plenty of animations, grand features and big changes to the base gameplay won’t get much out of this slot, unfortunately.

Browse casinos with Illuminous and other slots from Quickspin. Create an account and try the game for free before making a deposit.

You can play Illuminous in English, Finnish, Swedish, Spanish and 13 other languages. 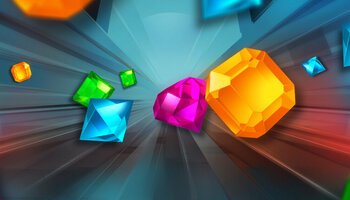