Immortal Guild takes a swipe at the type of fantasy that got popular after Lord of the Rings. Here, the player gets to follow a group of adventurers as they explore strange lands while using non-standard reels, free spins and multipliers to get ahead.

This slot was developed by smaller studio Push Gaming, which has released some noticeable slots over time. This game was released in 2019 but it looks as sharp and beautiful as the day it was released. There is clearly a lot of love put into the design of these characters and the entire appearance of the game. It is built around a 5-reel, 5-row playing field that uses the consecutive reels mechanic to generate wins, resulting in a massive 1,024 paylines.

If you’re a fan of the fantasy setting you’ll likely get your fill here. There are different famous races present like elves, humans and dwarves which are represented in different ways. The symbols are hand-drawn and represent the culture in different ways, from pictures of characters to weapons and symbols. I thought this was all a great way to do some worldbuilding.

The sound design can’t stay far behind in this case and the composers really leaned into the fantasy setting as well. They used a bombastic sounding orchestra that helps set the mood and keeps people invested. Some of the sound effects might be a bit awkward like counting out a big win but in general, it all sounds appropriate.

Immortal Guild has a series of symbols that you can tell are more or less important depending on the level of quality. The characters are obviously the highest paying, then the weapons and items, and finally the symbols. These are all done to fit the theme but still help a slot player with deciding which symbols they should focus on.

While the game does have a high number of paylines, the larger number of symbols with a moderate payout and the limited effect features have on wins, the game still has High Volatility. Players will need to keep a close eye on their funds to make sure they don’t drop down too low. That’s not to say high wins are completely out of the question, as even I got several big wins during my limited time playing.

It’s still smart to keep your initial bets low, choosing a bet between £0.25 and £100 per spin should give you enough room to do so. If there are any power players present, they can shoot for the max. win of 50,000x your bet. That’s obviously a massive win even when playing on the lowest possible bets, but it doesn’t need to be said this doesn’t trigger often.

As far as the symbols in the game go, their values are:

Immortal Guild keeps things relatively simple when it comes to the features, even though it uses a non-standard playing reel. Most of the mechanics will be familiar to experienced players and the few additions that are included won’t be too surprising.

The main game is the place players will spend most of their time during this game, but I found that the free spins mode was very likely to trigger. I had times where I would activate this mode more than once in a hundred spins, which is very good compared to other slots. It does make sense since the payouts are very low and it will take special features to help increase those wins.

The re-spins functionality was less clear but also triggered quite often. Any time more than one Human, Elf or Dwarf symbol appears on the same reel on adjacent tiles, they will merge down. This merger will apply a multiplier, the symbol becomes sticky and it will trigger a re-spin. This re-spin can create another win. When that happens, more re-spins are activated until there are no more wins.

All of the special features are also wildly volatile, as I once walked away with 400x my bet during a free spins mode, and another time I only managed to get 10x my bet out of it. Don’t expect these triggers to instantly award you.

Immortal Guild is clearly made by fans of the fantasy genre, revelling in the sights and tropes that come with this type of fiction. The art is beautiful and the music really builds on it. Even if the gameplay of this slot doesn’t appeal to you but you’re a fantasy fan, you owe it to yourself to give it a try.

When it comes to the gameplay, I found that it keeps up quite well. There are some surprises while playing, mostly about how often the free spins mode is activated. The fact that symbols can merge to apply a multiplier and trigger a re-spin is also something I haven’t seen much before.

The slot does require some patience from its players. The volatility demands that you are ready to stick around for a while to see any kind of return on your bets if you get one at all. It’s not out of the question that players won’t be rewarded for their patience at all, so tread carefully.

Browse casinos with Immortal Guild and other slots from Push Gaming. Create an account and try the game for free before making a deposit.

You can play Immortal Guild in English, Finnish, Swedish, German and 16 other languages. 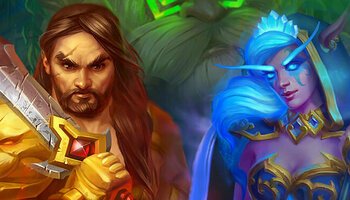