Immortal Romance is a legendary slot that has now been completely remastered. Check out the new and improved slot.

Microgaming’s Immortal Romance was originally released in 2011 and it is one of their most well-known slots. The game was amazing when it came out and is still worth playing even now almost ten years later. The only problem was that the game’s engine was getting a bit outdated.

Microgaming wasn’t just going to let a legend get lost in time, so they decided to fix it. In May of 2020, Immortal Romance Remastered was released. The updated version fixed the engine and made the game feel more modern.

Perhaps the biggest update was the mobile version. The old slot was very hard to get working any more, but the new version will work with any phone or tablet.

If you aren’t familiar with the game, it is an interesting story-driven slot about vampires. This game has tons of depth and you can unlock new features by playing on.

When Immortal Romance was originally released, it was a trailblazer. The game had some amazing visuals and one of the greatest soundscapes of all time. Jumping a decade forward, the visual side needed a little pick-me-up, but the sounds were still kicking butt.

When the slot got remastered, the graphics got the update it needed. The new engine provides crisp, high-quality images that scale up well to any screen size.

As for the game itself, it is a gorgeous vampire-themed slot. You can easily spot a few sources of inspiration, like the TV-show True Blood or the surprising similarity between the character Sarah and Bree from Desperate Housewives.

The game features a good amount of voice acting, and all the story elements and character histories are read out loud. Although the best part is the music. The game has a banging soundtrack with some really nice songs on it. Each of the characters have their own songs, which play during their own special features.

I can’t help but smile when I hear these songs play out. They are a perfect time capsule of gothic rock from 2005 to 2010. Even though the songs are original, you can easily hear what the developers were going for.

The reels are filled with a bunch of good-looking symbols, and I do mean filled. There are twelve regular symbols and two specials ones, a doubling wild and a scatter.

The regulars are divided into two categories, low-tier card numbers and high-tier picture symbols. I do have to point out that only some of the high-tier symbols are actually valuable. Two-thirds of all the symbols are basically worthless.

That is the crux of the game. The volatility is high and the pay structure is top-heavy. You won’t get far just by hitting those small wins. You need to go for the special features and try to get those character symbols on the reels.

Speaking of the special features, they are quite interesting. The game has a free spin feature that opens up as you play the game. The more times you activate it, the better spins you can get. Note that the feature is not linked to your wager, so you can open it up with tiny bets.

Immortal Romance has quite a hefty jackpot. You can win up to 12,150 times your bet with a single spin. Just activate the Wild Desire feature and get all five reels to turn into wilds.

Occasionally your vampires will get hungry. Dark red clouds cover the skies and blood will fall on the reels for you to feed on. Wild Desire is a random feature that can activate at the start of any regular spins.

When Wild Desire activates, up to five reels can be completely turned into wilds. This is the way to get the single largest win in the entire game. If you hit all wilds, you win 12,150x your wager.

Knock on the door to enter the Chamber of Spins and if you are loud enough, you may enter. Get at least three door knocker symbols and the door will open.

Each of the characters have their own feature. They include some story, which is revealed even further if you win big with a character symbol.

You can choose any of the available characters after you have unlocked them.

Immortal Romance is built on an idea that players should be rewarded for simply playing. Every time you activate the Chamber of Spins, you fill your tracker by one. For every five hits, you unlock a new character. Amber is available from the start and the rest will open in order.

The features you unlock will stay open even if you quit. Just go back to the same casino and you can continue where you left off.

With the new Remastered version, sometimes the unlocked features won’t transfer from the old game to the new correctly. If this happens to you, contact the customer support. Many casinos have given people free spins if they lost their progression.

When Immortal Romance was originally released, it made waves. The slot was technically advanced and was full of interesting features. It was a major hit, no questions about it.

The original version of the slot was getting a bit old and I’m really glad that Microgaming wasn’t just going to let this game fade away. The remastered version will let a new generation of players enjoy this classic.

Immortal Romance is one of those games that I love to play, but do so too rarely. Thanks to this new version, I’m sure to pick it up a bit more often. I’ve always enjoyed it, but there are just so many options these days.

If you haven’t ever played Immortal Romance, I urge you to try it. There is a reason why this game is still talked about a decade after its original release and why it was remastered.

Browse casinos with Immortal Romance and other slots from Microgaming. Create an account and try the game for free before making a deposit.

You can play Immortal Romance in English, Finnish, Swedish, German and 26 other languages. 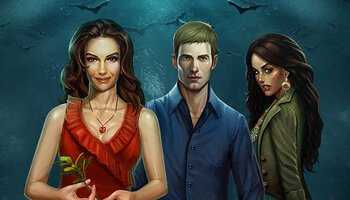