Imperial Fruits: 5 Lines is developer Playson’s attempt at adding some royalty into their slots as we are treated to a stacking crown to fill the reels with and maybe create some wins.

The game was released in 2019, granting players the ability to play a slot that resembles a classic fruit machine with some extra features and 5 bet lines. The playing field consists of the standard 5-reel, 3-row layout with symbols that most players will find rather familiar. Not just in general, but also specifically to the games released by Playson. All of the fruit symbols have been used in other slots before and after.

Perhaps it’s a cost-saving measure, maybe the artists are really proud of their work? Either way, playing a Playson slot is likely to confront you with the same symbols time and time again. They don’t look bad but they also don’t offer any originality. In the case of Imperial Fruits: 5 Lines there are some original symbols for a change but they are outnumbered by the familiar ones.

Unfortunately, the sound design is just as underdeveloped as the graphics. The reels simply tick when they’re spinning and a winning payline will only trigger a tiny tune. Getting a big win plays a select part of a famous classical song which isn’t even exclusive to Playson slots.

As I’ve addressed before, Imperial Fruits: 5 Lines doesn’t have a lot of original symbols. They all look great, with a lot of detail and each looking distinct from each other. They’re however also not new, having been used in plenty of other slots by this developer. There are only a few new symbols, those being the crown and the diamond star. Even the diamond star is just a recolouring of the gold star.

The advantage of the big symbols and their traditional designs is that they are easy to tell apart. Getting a win is emphasized by having flames burst out underneath each tile as well as showing the win line that they are on. Getting a big win will show you the total coin amount you won while playing a musical piece. In general, the pace of the game is quite high, especially when using the Autoplay function. The game lands on a Medium Volatility between the rather large number of different symbols and the use of several features.

Even though Imperial Fruits: 5 Lines is a basic slot it does have a few features worth mentioning. Where other games like Sevens & Fruits only has the most basic elements, this game makes it a bit more modern:

This is a small number of features, but they do change up the gameplay somewhat. The main feature to pay attention to is the Crown Wild. These appear quite often on the screen.

The Scatters added a little more of a dimension to the game as well, even though they hardly triggered. The Diamond Stars are Scatters that only appear on reels 1, 3 and 5 which means they can only be part of a three-of-a-kind win. Meanwhile, the Gold Stars can appear on any reel and thus be as big as a five-of-a-kind win.

I thought the features add a little colour to the gameplay but it’s still very basic. Players that enjoy very simple slots with barely any features will probably have a good time here, but anyone that’s gotten bored of the classic gameplay won’t find much here.

Playson has shown itself to be rather hesitant to explore original gameplay concepts, opting instead to stay close to the original fruit machine as a starting template and then adjusting it slightly. They do have some newer slots that stray away from this concept but they’re still the exception and not the rule.

Imperial Fruits: 5 Lines is a testament to their reluctance, bringing out yet another fruit machine that was slightly updated with some simple features to just barely push it into the video slot area. Players that enjoy a classic fruit machine won’t find it here as the extra features and pay lines disturb that idea. Meanwhile, modern players won’t find much of note here either.

It’s a tricky game to recommend as I’m sure there are a few people that live for these kinds of games. Nonetheless, I think it misses the boat for most other players. It’s either too different or too similar to other games for either type of player.

If you do intend to try it out, the game lets you pick a bet between £0.10 and £100 per spin with a max. win of 820x your bet. It’s not much but I found the game to trend upwards during my time playing so you might not even need the jackpot to net a sizeable profit.

Browse casinos with Imperial Fruits: 5 lines and other slots from Playson. Create an account and try the game for free before making a deposit.

You can play Imperial Fruits: 5 lines in English, Finnish, Swedish, German and 18 other languages. 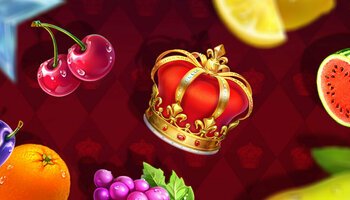