Indiana’s Quest lets us follow the industrious adventurer as he explores yet another ancient temple hidden deep in a lush jungle, with wild animals and cascading reels to keep him from his prize!

If you’re looking for an adventure deep in the jungle with an intrepid explorer, this Evoplay Entertainment slot released in 2017 might be just what you’re looking for. I found the game to have excellent graphics, a few interesting features and a lot of things to look at while I played. The game comes with a 5-reel, 3-row playing field and a standard 20 betlines.

Indiana’s Quest is very good at setting the stage, putting us in a sweltering jungle as the sun drops down below the mountainous horizon. The playing field is seemingly part of an ancient temple while Indiana is standing next to the slot to cheer us on. I really liked his appearance and especially the number of animations he has, reacting to different occurrences while I played.

There are other things moving on the screen too, from Indiana throwing dynamite onto the field to a gorilla bursting through or a rhino stampeding past. The symbols themselves aren’t quite as animated but they do light up when part of a win before crumbling into bits.

The sound might be slightly disappointing compared to the visual bombast, playing very soft and slow music in the background. When there’s a win, you’ll hear a trumpet jingle and that’s about all there is to it. I would have liked more energetic music to play, especially considering the movies and books the game clearly draws inspiration from.

All the symbols in Indiana’s Quest are unique, resembling different types of Incan masks. The Wilds are a skull with a fedora hat, while the Scatter symbols are golden tablets. I found it to be quite distinct and easy to tell apart. Whenever there’s a win, little glowing flies land on the tiles to light them up which I thought was a great detail that fit the theme of the slot.

Since there aren’t that many different symbols and the game comes with a cascading reels feature, the slot has a Medium Volatility. I found this to fit my experience, since even though it was quite likely to get a small win rather frequently, overall it would take a little longer to get a bigger win and get back the coins that were spent on spinning.

Indiana’s Quest uses a small selection of features that work well together. Apart from the Free Spins, all the features are part of the base game.

I thought the features made the base game quite exciting since it’s possible at any time that any of these special features activate. I found the Gorilla especially useful, as this can add 1 or 2 reels with Stacked Wilds. Depending on where these reels are on the screen, this can facilitate a large number of wins.

The other features were fun too, with both Indiana’s dynamite and the rhino scrambling the playing field and adding new symbols. This can potentially create new wins.

Whenever there are two Scatter Symbols on the screen, Indiana can shoot a random symbol which can turn into a third Scatter Symbol which activates the Free Spins mode. Although this is not guaranteed, I did have it trigger the special feature a few times.

Unfortunately, I still did not find the Free Spins mode to be particularly beneficial. The multiplier is increased but all the other features are the same, making it just as likely or unlikely to get a big win in this mode as it is in the base game. During my time playing, I think I preferred the base game.

Compared to other Evoplay Entertainment slots from years before, Indiana’s Quest is showing a lot of improvement. The character is beautifully animated and feels like an integral part of the slot. The background and details in the game are very well done, even though the soundtrack lags behind somewhat.

The features reminded me a lot of The Great Wall Treasures by the same developer that came out a year earlier, even though it didn’t have the same special features. It definitely feels like an evolution from that. The cascading reels were a big part of the gameplay in both games, even though I didn’t really notice them helping in getting big wins.

Indiana’s Quest is a great game for the casual player that enjoys a series of features and a beautiful looking slot without banking on big wins. The game lets players choose a bet between £0.10 and £500 if someone is feeling brave, and the max. win of 2,667x your bet is nothing to scoff at but I never felt like I was close to that win while I was playing.

Browse casinos with Indiana's Quest and other slots from Evoplay Entertainment. Create an account and try the game for free before making a deposit.

You can play Indiana's Quest in English, Chinese 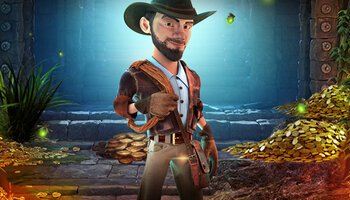