Inferno Joker makes use of the most basic elements of classic slots and puts them together in a slightly more updated look and with some more modern features. The game comes with re-spins and sticky re-spins to keep the players engaged.

If you are looking for a return to older slots but with the graphics and general gameplay features that you’ve come to expect from modern games, Play ‘n GO released this game for you in 2019. When it comes to its appearance, the slot does a good job at looking modern. Even though there aren’t many animations, the graphics are all very sharp and detailed. The art is hand-drawn even though the symbols themselves aren’t based on original items.

Most of the slot relies on heavily used items and symbols that we will be familiar with through hundreds of other slots. Fruits, sevens and obviously the joker symbol play prominent roles in the game. Whenever there’s a win on one of the 5 paylines, the tiles involved light up slightly and a thread shows the win line but nothing more. Behind the 5-reel, 3-row playing field we only see a vague pink field with diamond shapes.

I thought the music was easily the most modern part of the game. An energetic and upbeat song that gives the slot some much-needed energy. It also sounded like an original song, that meshes well with the extravagant colours that are used in the slot. The sound effects are mixed in well with the song, especially bigger win jingles.

Inferno Joker stays close to the original symbols that we are used to from older slots. They are all hand-drawn and made to look detailed. The game also gives them plenty of room to show off these details. With the use of different colours and shapes, everything stays easily distinguishable.

The game includes the following symbols:

Because the slot has only a few paylines it is rather difficult to get a win. The game’s High Volatility shouldn’t come as a surprise to people. The payouts for wins are decent which help increase their funds, but players should expect a lot of time between even regular wins.

To help deal with the volatility, players can pick their bets between £0.05 and £100 per spin. As it pays to be able to play for a long time I would strongly recommend starting with lower bets to see how bad the volatility is before potentially increasing your bets.

Despite the game having high volatility, I did see my funds trend upwards thankful mostly because of the re-spin functionality. For a few players, they might also be rewarded with the max. win of 2,500x their bet.

Inferno Joker gives players the possibility to go back to the older type of slots. This also explains why there aren’t a lot of features included with the game. I didn’t think this made the game boring but it did make it feel a lot simpler and easier.

Most of the time during the slot the game doesn’t offer anything special, as the reels simply spin and very occasionally will grant a regular win. These wins will be quite big compared to other slots simply due to their payouts. The game has no extra multipliers or any way to enable bigger wins.

Inferno Jokers were in my perception about as rare as the normal Joker, so getting a re-spin was about as likely as getting a normal Joker on the screen. Once they activated, they would grant some bigger wins, especially with 3 or more Jokers on the screen as they count as Scatters and add up towards an automatic win.

Inferno Joker is a slot that gives the classic gameplay of the old video slots some updated graphics while staying very close to the normal experience. Players will be able to enjoy some great sharp drawings without being distracted by a large number of different features.

There is really only one feature present in the game, which can help create some big wins. At the same time, this feature is rare and can trigger without actually having any effect on the results of the spin. The game feels to have very high volatility because of this, even when compared to similar slots.

If you’re someone who is looking for a modern but simple slot with only a single feature to spice up the gameplay, Inferno Joker might be something for you. Players that prefer a modern slot that also includes more features and a more engaging gameplay loop will likely be better off looking elsewhere.

Browse casinos with Inferno Joker and other slots from Play'n GO. Create an account and try the game for free before making a deposit.

You can play Inferno Joker in English, Finnish, Swedish, German and 30 other languages. 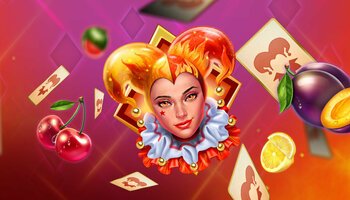