Io is the very short name for the space-based slot by Elk Studios which brings the player into deep space where they are set to play with a series of cascading reels. The game further features expanding reels, multiplier wilds and sticky wilds.

Released in 2020, Io is a rather simple looking slot when it comes to the graphics with small balls that represent the different tiles. In the tiles are small, generic-looking symbols of things like stars and diamonds as well as the usual card letters. If this all sounds pretty basic, it does serve a purpose. With a 6-reel, 4-row playing field that can grow to hold a maximum of 8 rows the slot needs a lot of room for these extra tiles.

The background shows that we’re in deep space with a starry sky and an alien planet in the distance. It’s not terribly original and very simple, but I appreciate it isn’t just a generic colour. The play area is also not very creative but this leaves more attention to the gameplay. There are several animations that trigger when certain features are activated but most of the game is static.

The symbols used for Io are not very creative, with most if not all of them based on generic symbols that everyone will be familiar with. Through the use of colour, they do stay distinct which is the more important aspect, especially as the playing field grows after consecutive wins. The game can have between 4,096 and 262,144 paylines on the screen at any given time so clarity seems like the bigger priority.

The symbols you’ll find in this slot include:

The game uses a number of different features to help create multiple wins at once which is why the payouts for a single win are so low. Nonetheless, getting a big enough win requires several things to go right which puts it at High Volatility. Players can augment their experience somewhat by picking a bet between £0.20 and £100 per spin.

Io has a number of features that augment the gameplay in subtle and less subtle ways, but in general the game functions as a normal slot, it just looks different. The game uses round tiles which I thought meant it would use a cluster pays mechanic, but it doesn’t. Io still uses regular paylines to calculate wins.

If you do manage to activate the Free Spins mode, the game will have all 8 rows activated the entire time. Charged Wilds and Wild Forge symbols are collected at the bottom of the screen between every spin.

Although there are a lot of features, I did not find the game difficult to understand. Most of the features are either active every spin or they do something that most people will know from other slots. There are different types of Wilds but essentially they all work to substitute other symbols, for example.

Io is a very simple name for a rather simple-looking slot with a lot more depth in the features. The game isn’t for those that are looking for a rudimentary fruit machine, and it’s not quite inventive enough to satisfy experimental players.

However, for people who are looking for a slight departure from the standard 5-reel, 3-row slot with 20 paylines, Io might be exactly what they are looking for. The features are easy enough to understand while being influential enough to change up the gameplay.

The potential jackpot of max. 5,000x your bet is a sizeable incentive to try it out, but it will require you to hit the free spins mode and several more steps to reach the maximum payout. Instead, I’d recommend you just give the game a try for its original approach and see if that is enticing enough.

Browse casinos with Io and other slots from Elk. Create an account and try the game for free before making a deposit.

You can play Io in English, Finnish, Swedish, German and 18 other languages. 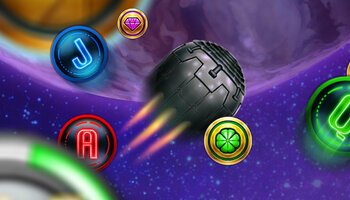