Irish Gold brings us to the green fields of Ireland where we can see for ourselves if those help in getting good spins and big wins!

Released in 2012 by developer Play ‘n GO, Irish Gold is firmly set in Irish surroundings. In the background, we see a stark blue sky, rainbows and a lush green field. Meanwhile, the reels are populated by the lucky clover and the Irish leprechaun.

I have to say, this slot did not age well. The graphics are bare, there are little animations, the music is lacklustre and there are barely any features. If you’re a hardcore purist gamer that prefers 3-reel, 3-row slots with 5 paylines I think Irish Gold adjusts the base gameplay a bit too much to fit your preferences too!

Even though 2012 is quite some time ago in the video slot timeline, there are other slots that came out around or before that time that are superior to Irish Gold. What to think of NetEnt’s Lucky Angler: A Snowy Catch that came out the same year? It was filled with features and incredible detail for such an older game. Play ‘n GO itself released Troll Hunters only a year later, a slot filled with unique symbols, animations and a 5x5 playing field.

Whatever the reason, Irish Gold feels rather limited when compared to both newer and contemporary slots. The symbols are rather simple, with some short animations for the special symbols. Meanwhile, the soundtrack fits all the stereotypes you might expect from a game set in Ireland!

Irish Gold is very light on symbols, but that still won’t mean you’ll get wins easily. The listed High Volatility fit my experience since so often the reels don’t stop on a payline and thus don’t count. There are some special symbols that should facilitate a win a little bit but in my experience, they hardly helped.

As you can tell, the awarded coins come in very low amounts with only 3 Wilds on a winning payline really making an impact. It’s probably also why the max. win is only 1,000x your bet. Even though that’s quite an amount, it didn’t feel like it was reasonable to expect that to hit, especially considering the high volatility. The ability to choose a bet between £0.01 and £25 per spin does help in managing your spending.

The symbols are not very inspired. Most of the game is composed out of Bars, which are literally just bars with a colour gradient on them. The leprechaun looks alright and the clover is animated when it’s part of a win but other than that it feels very stale.

Irish Gold doesn’t have a lot of features and none of them takes you away from the base game. They only enhance the base experience a little bit. As I mentioned before, slot purists might not like the change but I found it to add some levity to the slot. They’re not very common, however.

As you can see, this only slightly changes the functioning of the slot. The Scatter symbols probably helped me get a win most often, but with 2 Scatter symbols, you only get 2x your initial bet which is very low. I never saw 3 of them appear at the same time.

The Multiplier Wilds did help me out a little more, one time adding a 5x multiplier to a leprechaun payline. This was a big win but it was also one of the only times I saw that happen. Obviously, it might very well work out differently for you but it’s something to keep in mind.

Looking on Play ‘n GO’s website Irish Gold seems to be one of the oldest slots the developer ever released and it shows. While big names like NetEnt had already been working on video slots for a few years at that point, this developer had only just started.

In that context, I can forgive them the basic template of Irish Gold and the small number of features and symbols. They just wanted to release a slot that got their name out there.

Over time, I think the developer has shown itself capable of producing creative, fun and engaging slots that sometimes stay close to the core concept and sometimes stray away from them. In that regard, we shouldn’t hold their earliest attempts against them.

If you’re curious what a developer’s first slot looks like, then you should definitely try out Irish Gold.

Browse casinos with Irish Gold and other slots from Play'n GO. Create an account and try the game for free before making a deposit.

You can play Irish Gold in English, Finnish, Swedish, German and 30 other languages. 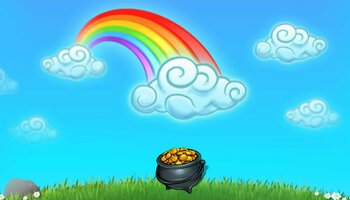