It Came From Venus slot review

Play It Came From Venus

Are you into farming? Neither am I, but It Came From Venus by Betsoft comes with a jackpot.

The title of this game caught me off guard. I wanted to find out just what this is all about and surprise - it isn't about feminine aliens.

For starters, I had an easy time digesting the theme. It has one of the weirdest premises for a jackpot slot. The symbols and the backstory are quite alright, but It Came From Venus isn't only about that.

The set of extra features can make the gameplay entertaining and rewarding. As I expected, Betsoft has included more than one bonus feature and this is always a good thing to have.

In addition to the pick-me game and the free spins bonus, It Came From Venus comes with a respin feature in the base game and multiplier wilds.

All in all, there is enough material here for a fun-loving reel adventure.

The game takes place on the farm of a couple of corn growers. You wouldn't bat an eye at a field of corn, dotted by an old barn and a tool shed but something fishy is happening there.

The huge carnivore flower, also known as Venus Flytrap, that sits in the bottom-left corner of the screen is an alien being. Naturally, a squad of Area 51 types has taken interest in the creature.

All of the above is woven into the gameplay for all the good reasons. Although sometimes Betsoft does it a tad too much, this time around the animation is just right. It makes It Came From Venus a game that you'd remember playing.

For starters, one of the most beneficial symbols to grace your reel set is the Wild.

The extraordinary thing about it is is that it can assume a random multiplier value of 2x, 3x or 4x your win.

Betsoft didn't pull any cheap shots with this game, as you can get the random multiplier Wilds on two out of five reels (two and four).

Usually, scatter symbols are tied with the bonus game, but here, the Do Not Trespass symbol is tasked with paying a cash prize if three or more of the same land anywhere on the reels.

Yeah, this is another 'funny' thing about It Came From Venus. The cattle feed symbol (represented by a brown sack) is a bonus symbol. Each time one lands on the middle reel, it gets noted in the meter below.

You need to get five food sacks in total to start the Feed Me Free Spins bonus. In the event, the fifth bonus symbol stays in place and acts as a sticky Wild.

You can collect additional bonus symbols during the free rounds and some of these can remain locked on the reel set to act as additional sticky Wilds.

You'll certainly have noticed the helicopter symbol. Three of these trigger the pick-me bonus feature.

The game is simple - start by choosing one of five crates to reveal cash prizes (empty boxes) or the Venus Flytrap which adds a bonus win and ends the game.

Last by not least, the second base game feature in addition to the multiplier Wilds. The game awards you respins every time you get two reels stacked with the same symbol.

The caveat is, stacked reels can occur on reels one, three and five. Getting two stacks automatically adds a 2x win multiplier to your bet and getting three matching stacks comes with a neat 40x win multiplier.

I felt that the multitude of extra features, including the reel modifiers and multiplier Wilds, does well to hype up your gameplay.

Betsoft has placed a pretty nice machine in the back of the reels - it's one that makes frequent awards and doesn't procrastinate on triggering the extra features.

With that in mind, It Came From Venus is enjoyable and has a decent potential of posting big wins.

On the other hand, I wasn't impressed with the paytable. I expected small payouts for the first five or six symbols (low to high) but it's the structure that matters.

You aren't going to win back your stake by getting three or four of a kind for the first three symbols. The earth mound and the military vehicle symbols pay 30x your payline bet, which translates to 1x your bet.

But if you consider the high-paying symbols, three of a kind isn't enough to make a gain. This goes to say that It Came From Venus is all about the extra features.

I can't ignore the fact that this is a jackpot game. Sure, the odds are long, but the potential outcome is there.

To win the jackpot prize you need to Bet Max, that is, multiple your payline bet by five.

If you play one penny per payline, you will be spending 1.50 pounds per spin to be eligible for winning the jackpot prize.

It Came From Venus is fun to play and comes with enough extra features to keep you on the edge of your seat for a while. Medium volatility means you can expect anything in terms of winning outcomes - from low to exceptionally high.

My favourite part of the game are outcomes where you can get a multiplier Wild with a double or triple stack respin. If the stacks consist of a high-paying symbol, the outcome is likely to turn up a pretty payout Overall, I do recommend the game. It’s old, but gold.

Play It Came From Venus for free

Browse casinos with It Came From Venus and other slots from Betsoft. Create an account and try the game for free before making a deposit.

You can play It Came From Venus in English, Finnish, Swedish, German and 22 other languages. 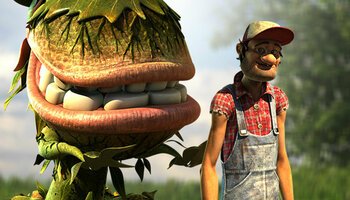