Jack and the Beanstalk slot review

Play Jack and the Beanstalk

Who hasn’t heard of the famous fable of a little boy called Jack, who sold his cow for magic beans and then defeated an evil giant to become rich? Although Jack’s mother was less than enthralled by Jack’s exchange, the beans eventually grew to gigantic heights. Jack climbs them until he reaches the enchanted castle of a giant.

This slot game may be a personal favourite, so forgive me, dear readers, if this review is slightly biased. Jack and the Beanstalk emerged as one of the more popular slots from NetEnt’s Fairytale series, thanks to its innovative features.

Spread over five-reels, three-rows and 20 paylines, this 2013 slot-released boasts Walking Wilds with re-spins, Wild Multipliers and much more. Let’s just say; this is a Wild fest with re-spins that gives gamification an enhancement.

The game is set right in front of Jack’s house, and this is where we can expect to see the massive Beanstalk to appear.

Although this game was released shy of seven years ago, it boasts all the mod cons of modern slot games. In terms of entertainment value, it delivers an array of unique features which are evident of NetEnt’s height of success.

Graphically and visually, the game is as you’d expect a fairy-tale to be. Colourful without any flashy elements making it an absolute delight to play. When it comes to sounds, you’ll hear birds chirping distantly, Jack occasionally hurrahing and a cheerful little jig, when you have a walking wild.

Overall, this game has successfully managed to retain its initial allure with players actively seeking it thanks to being one of the most prolific 3D slots. If you haven’t guessed it by now, I’m still a big fan.

This slot game has a variety of exceptional features that makes for captivating gameplay. To begin with, there is the Scatter icon (treasure chest). Land three of these scatters anywhere on reels, to trigger the free spins round. Once activated, you are immediately credited 10 free spins. During this round, you can trigger a further five free spins on top.

But this is where it gets better. The best symbol out of all of them is the ‘Walking Wild’ icon (Jack and the Beanstalk logo). When the logo crops up anywhere on the reels, you are awarded a re-spin.

For every re-spin, the wild moves one reel to the left, activating another re-spin. This keeps on going until the Walking Wild has left the reels. Oh, and all wins generated from this wild, pay 3x your bet. Phew!

If that wasn’t enough, there is a rather enticing free spins round that unlocks a myriad of exciting features. Whenever I land the free spins round, it keeps me on my toes as there are massive wins up for grabs.

During this round, your main aim is to collect Keys. For every three Keys you receive, a random Wild will pop up onto the reels, which can transform into one of the following:

Once your head stops spinning from the free spins round, you should also be aware, that although this slot game doesn’t come with a jackpot, you have the golden opportunity of winning up a humongous 30,000-coin win.

Jack and the Beanstalk has an RTP of 96.3%, and although it is a highly volatile slot game, it more than makes up for it, in terms of unique features and entertainment value.

As you guys are probably aware by now, I’m not a big enthusiast of high variance. I mostly prefer slot games of medium variance, but this game is one of those rare slot games that keeps me pinned to my seat. The ‘Walking Wild’ symbol has set the bar high for all other software providers to compete with.

Bear in mind, that when this slot game came out, software provider Net Entertainment was riding a high wave of success and carving for itself a solid reputation for unique features and belting out slot games of the highest calibre.

Needless to say, Jack and the Beanstalk has successfully sealed itself as a player favourite and stood the test of time.

Play Jack and the Beanstalk for free

Browse casinos with Jack and the Beanstalk and other slots from NetEnt. Create an account and try the game for free before making a deposit.

You can play Jack and the Beanstalk in English, Finnish, Swedish, German and 20 other languages.

Jack and the Beanstalk supports GBP, EUR, SEK, NOK and 33 other currencies. 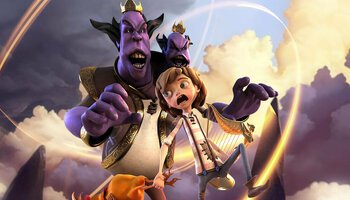