Jade Charms shows us a wide range of exquisite jewellery that is enhanced by the inclusion of beautiful green gemstones. Perhaps we can reach into the jewellery case and see what comes out.

The slot Jade Charms was developed by Red Tiger and released in 2016. In its concept, it’s very familiar to the Mega Jade slot, which was also created by Red Tiger and released in the same year. I think that this game has a lot more personality and looks much better as well. Just like the other slot it has a 5-reel, 3-row playing field but compared to Mega Jade it has not 10 but 20 betlines.

Even though we can’t see anything in the background, there are subtle signs that we’re looking at a jewellery cabinet in a store. The frame of the slot has details that make it look like it’s a case as well as a knob on the side which hides a little box holding a special feature. The biggest hints, however, are the gloved hands that sometimes appear. These hands add Wilds to the reels or hold up a Big Win sign when there is one.

I thought this was incredibly clever. The slot itself does not use a lot of colours, with black and gold being the most prominent ones. The jade jewellery contrasts well with this. The use of the gloved hands gives an immediate sense of where we are without having to be too obvious about it.

The music was perhaps a little too magical for my taste, considering the down-to-earth setting of a shop. Nonetheless, it sounded fine and wasn’t imposing or distracting.

The symbols in the slot are detailed without going overboard. The different jade jewellery that makes up the high-paying symbols each look distinct from each other. The low-paying symbols are unfortunately just card letters. I did appreciate that they kept the colours toned for those, using deep, rich colours that meshed well with the black and gold.

Even though there wasn’t a lot of movement in the game, it still felt very detailed and alive. When there was a win the symbols involved simply lit up and had no specific animations attached to them. The only real movement in the game were the reels spinning and the hands that dropped down Wilds onto the playing field, but I felt that was enough. Because of the high number of different symbols the game has a listed High Volatility which I felt was accurate during my time playing. The wins were rather sparse but unfortunately not very awarding when they did occur.

While the design of the slot is very much on point, I think the features lag behind a bit. They’re not bad features but they’re not very exciting and they don’t feel like an addition to the game. First a quick overview:

Regular Wilds and Random Wilds show up quite often during the base game. They are finely detailed and clear, giving players an immediate sense of any wins they helped make. The Random Wilds are placed by the gloved hands, which enforces the idea of a store attendant helping you make a decision about the jewellery in the case.

In contrast with the Wilds, the Free Spins barely showed up and getting the Free Spins mode to activate proved to be very difficult for me. There didn’t seem to be any specific reason for it, the symbols just didn’t appear very often.

When it did trigger, the Free Spins mode had the possibility of being quite lucrative. During my time playing, I wouldn’t say it compensated for the coins I spent but it did give a good boost all the same. The Free Spins mode begins when there are 3 Free Spins symbols on the screen and you have to pick one of them to reveal the amount of Free Spins you get to play with. In my experience, it was between 8 and 12 but I’m sure there are bigger numbers hidden as well.

Once the free spins start, there is a possibility for the little box to the side of the slot to be opened. It can either reveal a high-paying symbol, in which case all high-paying symbols in that spin will be replaced by that symbol. This would give me the biggest wins.

The other possibility for what’s in the box is a multiplier, which is applied to all wins during that spin. Since it doesn’t actually increase the possibility of a win it would often only apply to 1 or 2 winning betlines. So it wasn’t quite as lucrative to me, but it’s obviously likely that someone will benefit greatly from it!

The Free Spins mode was the best part of the game but because it was so incredibly rare it also felt like an oddity to see it activate. I wouldn’t count on it during my time playing which made the high volatility very punishing. The ability to pick a bet between £0.10 and £60 per spin let me control my losses a bit but it was still a downward trend if I played for long enough.

Jade Charms has some really impressive design considering the minimalist nature of the slot and the lack of animations. Having a sleek colour scheme and gloved hands interacting with the game was enough to create a theme that was consistent throughout playing it. Where other games tend to go big and bombastic to set the scene, Jade Charms showed it’s possible to do the same by going small!

The features included in the slot are fun but I felt that the Free Spins were too difficult to activate, which made it a very hard slot to get anything out of. If you’re the type of player that doesn’t play to win big but just wants to have a good time, I think it’s a good experience, however.

It’s odd to compare Jade Charms with Mega Jade. They’re both made by the same developer, released in the same year and with the same concept but Jade Charms wins in just about every way. The only thing I’m cautious about is the volatility.

Browse casinos with Jade Charms and other slots from Red Tiger. Create an account and try the game for free before making a deposit.

You can play Jade Charms in English, Finnish, Swedish, German and 18 other languages. 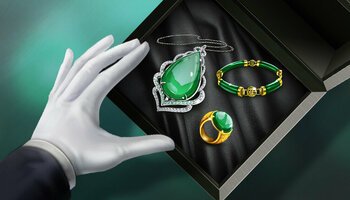