A comely magician makes use of jade to summon her ghostly creatures that can bring about heavy payloads. The name of the game is Jade Magician and it comes with three rows and five reels that can trigger winning outcomes of up to 225,000 coins.

The Jade Magician reminds me of a druid sorceress who has a penchant for jade pendants and for conjuring up the mystical powers of the moon. I can admit that the game has some appeal for me, especially in the area of extra features.

The first notable specification about the game is its ability to trigger wins that start from the first, second and third reels. As long as the three or four matching symbols fall on one of the 15 paylines, the game is good to pay. Since this type of slot is extremely rare, I used the opportunity to see payouts occurring in places where they wouldn’t normally be rewarded.

Another notable thing that I liked was the constant multiplier of 2x that is factored into the winning outcomes that include the wild symbol. Already, these two gameplay features make for more dynamic events on the reel set and are a recurring thing as you pace yourself for the free spins bonus, which is the main feature of the game.

This Play’n GO game was released in 2017 but my eagle eye tells me it had been probably picked up from the company’s ‘Do Next’ batch of older games. I don’t know why I get that feeling that the graphics appear just a tad dated for that year, but that's just a petty nuance.

Play'n GO has kept in line with the Druid/Magic theme throughout the game and I find the absence of the otherwise ubiquitous royal card symbols refreshing. The high-paying phoenix, white tiger and dragon symbols have been given a soul as they come alive in a pretty display of radiance when becoming part of a winning outcome.

I can also note that the music is expressive of the idea behind the theme, which is an artistic approach to the music instead of just writing what 'works'. I can appreciate that decision and I think it gives more personality to Jade Magician.

Players can try the game with a coin value of one penny per payline, which amounts to 15p per spin. The full range is between 1p and 25p which leaves enough room to choose a bet that you prefer. Generally, Jade Magician is a low-stakes game which I think fits perfectly its medium volatility.

The payout potential is quite amusing. This is a game that has a paytable structure that I prefer to see in games that are far superior in terms of gameplay and graphics.

The low-paying symbol category consisting of jade pendants has symbols that pay between 0.2x and 0.66x for three of a kind. You aren't going to get the bet back just yet, but it gets close enough with the jade rectangle symbol.

Four matching symbols already start to bear fruit, as the symbols pay between 1x and 3.33x and five of a kind can pay significantly better.

Over to the high-paying symbols that are represented by mythical animals, players can get quite significant returns with five matching symbols - 33.33x, 66.66x and 166.66x your bet.

Let's not forget the wild multiplier. Its role is not only to substitute but to also double any winning outcome that crops up with its help. This makes Jade Magician a game that you may overlook because of the theme and the graphics, but to me, the specs and the numbers on the paytable together spell out a thrill to be tasted.

Browse casinos with Jade Magician and other slots from Play'n GO. Create an account and try the game for free before making a deposit.

You can play Jade Magician in English, Finnish, Swedish, German and 30 other languages. 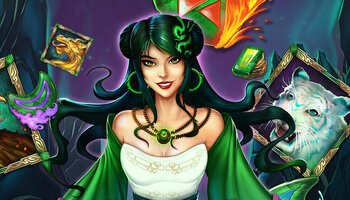