Jewel Blast features a series of floating jewels, exploding Wilds and cascading reels. The game has some great graphics as well as a thumping electronic soundtrack to keep things interesting.

Created by Quickspin and released in 2015, it took me a while to get this older slot running. Working on Flash, the Chrome browser doesn’t like to use it. A lot of players will find this a complication that makes it too difficult to play. There are browsers that still allow Flash to be run, however, so if you really wanted to play the game it is still possible.

The game has nice graphics, especially considering it’s getting up there in years, but the creators didn’t invest a lot of time in choosing a setting or setting the mood. The background is a simple gradient which gives it a space vibe, but that’s not established in any other way. The symbols look like they’re suspended in little bubbles, which is enforced by the subtle animations in the game. The game uses a standard 5-reel, 3-row playing field with 25 paylines.

There are plenty of things to see in Jewel Blast but it’s all disconnected. There is no overarching theme or setting that ties things together. I thought that was a missed opportunity since they would perhaps have made the game more memorable. In the same vein, the music was fine but seemed disconnected and random, playing an electronic beat that would fit any slot with a vague science vibe. None of it is bad, but it disappears in mediocrity.

The Symbols in Jewel Blast are comprised mostly of card letters and gems, with only the special symbols being truly unique. This reminded me of another slot Quickspin made called Dragon Shrine, where no effort was made to create symbols that stood out. Again, this ties in with the vibe of the entire game. The slot works fine but has no identity to rely on, making it very difficult for me to remember it amongst the literally hundreds of other slots I have played.

The symbols don’t pay out very large since the game has special features that enable bigger wins. Instead, the player is expected to play for long enough so that these big wins can occur, while the time in between is rather uneventful. Because of the way the game plays it has a Medium Volatility. Players that enjoy a game that has a steadier rate of payouts would do well to look further.

It’s possible to choose a bet between £0.25 and £100 per spin, which allows any player to find the bet size they’re most comfortable with. I personally found it best to stick to the medium bets, so that my funds would last long enough between big wins while still making these wins big enough to be interesting. I sometimes adjusted my bets depending on how high or low my funds were, so I advise any player to keep an eye out.

The features in Jewel Blast are not unique but interesting enough to give the game some much-needed flair. These are very important for the overall gameplay and play a big part in getting wins. It’s also why I found the regular gameplay rather stale since even with Wilds a win during the base game was unlikely.

The most important aspect of the game, and really the only one that matters, are the cascading reels. I thought it was rather unique how this feature is completely disabled during the base game and only activates at certain times. It seems to be something that requires a lot of work to implement and it would make sense for the developer to make maximum use of it.

Instead, Jewel Blast has gated its activation behind the Blast Bonus symbol. These symbols can appear on reels 2, 3 and 4. Whenever there are 2 or more of them, the bonus game is started and the cascading reels feature activated. Each Blast Bonus symbol explodes in turn, destroying other symbols and causing new ones to drop in.

Every time this happens, any new win lines are calculated and added to the total before the next symbol explodes. This continues for as long as there are Blast Bonus symbols. Additional of these special symbols can appear from the cascading reels.

In my experience, this was the most important part of the game. Where other slots require a series of wins in a row with cascading reels before you get the total payout or slots where only the last result matters, here there is a constant update of the total win. Every time there is an explosion, any new wins are added to the total and they’re all paid out together at the end.

Finally, the bonus game doesn’t feel like an interruption to the base game. It uses the same view and the same symbols. I think both players that enjoy these more modern features and classic players will find it an acceptable way of playing with it!

Jewel Blast is a slot that struggles to stand out from the ground. I found the graphics to be very nice, especially considering it’s an older slot, but the lack of identity or theme makes it very hard to place into context. Imagine having to describe this slot, it would sound like one of the dozens of other games by many different developers.

Of course, it’s all about the gameplay in the end and that’s solid as far as I’m concerned. The game makes good use of its cascading reels by only enabling them at certain times, which then act as stand-out moments during the gameplay. Its downside is that the regular gameplay looks dull and unrewarding in the meantime.

Players that enjoy a classic slot experience will probably like playing this game for a while before they drift off since it’s not especially good at grabbing attention. Modern players might stick around for its looks and cascading reels feature, but there are many similar slots that do both things much better. Finally, the max. win of 500x your bet is probably not going to entice many players to keep playing.

Browse casinos with Jewel Blast and other slots from Quickspin. Create an account and try the game for free before making a deposit.

You can play Jewel Blast in English, Finnish, Swedish, Russian and 4 other languages. 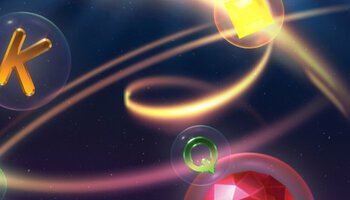