Family jewels are kept where they ought to be - inside the Jewel Box. This is where the sparkly geological marvels can accrue wild multipliers and few other perks that the game can offer towards its maximum payout potential of 131,715 coins.

Right from the start, I was able to recognise some gameplay and payout traits that Jewel Box shares with few other games by Play'n GO: wild multipliers, handsome symbol payouts and winning outcomes that start from the first, second and third reels.

The above has provided me with the perfect setting for a quality gaming experience on games like Jade Magician and few others, so I wasn't keen on skipping a potential big win or two on Jewel Box.

I found it amazing how precise the medium variance was throughout the gameplay. I was happy to get the choosing bonus game to trigger a few times, along with an instant prize that was worth telling my friends about.

If you are still with me on this review, I'll assume that you don't find the idea of peering inside a box of jewels bizarre. I didn't think so either. In terms of graphic design, the game may be more appealing to the female population, but the winning outcomes can bring about a kind of feeling that is universal for all.

Jewel Box reminds me of the pretty square space where people keep small objects that have some kind of sentimental or monetary value.

Whether you have one of your own or you pick up the association from a movie as if by a rule, a box for keeping jewels and gold always has a velvety piece of cloth underneath. The same is true for the game at hand.

The velvety crimson background can be seen around the reel set and from behind the transparent reels, which adds a nice visual touch to the gameplay. The symbols are clear diamonds, sapphires, rubies, emeralds, a brooch with a purple stone and a pearl necklace.

Somehow, the game has the look and feel of an 80s thriller movie. I have no idea where I am getting this from, but it somehow resonates strongly inside my memory.

But at any rate, Jewel Box is visually engaging and there are moving parts. The symbols can display their happy dance when they are part of a winning outcome, adding the final touch to what is a reel adventure with a realistic look and feel to it.

Jewel Box is rather straightforward in terms of its extra features. You aren't going to find a free spins bonus, which is completely fine by me, because the random number generator can arrange two surprise features that can trigger decent winning outcomes.

Setting up for the gameplay requires choosing a Coin Value amount. These range between 1p to £1.00 per payline and there are 15 selectable paylines. Once you've selected your bet you can press the Spin button to set the reels rolling.

There are seven paying symbols on the paytable, the wild and the bonus symbol, which I think is just enough for a fun-loving gaming experience. Thankfully, few of the symbols can trigger winning outcomes that are hefty on their own and even more lucrative when they've been made with the help of the wild.

The three high-paying symbols are the pearl necklace, the brooch and the diamond-studded ring. In the optimal turn of things, you can win 33.33x, 66.66x and 166.66x your bet for five matching symbols that belong to the above.

Factor-in the possibility that a wild multiplier of up to 5x can grace that winning payline and it becomes immediately clear why Jewel Box is still frequented by slots players who had heard of it when it came out in 2012.

Another detail to the gameplay that I used to like implementing is the gamble option that lets you place any winning outcome on the stake for a chance to double it. This is possible by selecting the ‘Gamble’ button that lights up following a win and by choosing either the correct colour or the suit of the next card on the flop.

Jewel Box may appear dated and buried underneath several well-known gem-themed slots out there, such as NetEnt’s Starburst, but this game is unique for all of the reasons I named above.

I prefer it that the variance isn’t high which allows for winning outcomes across the board, however, 4x and 5x wilds next to a high-paying symbol is a rare thing to see.

Still, something that isn't mentioned on the paytable but I've witnessed occurring often is the stacked reels. That's another plus to Jewel Box that you should consider if you are mulling whether to give it a chance.

Browse casinos with Jewel Box and other slots from Play'n GO. Create an account and try the game for free before making a deposit.

You can play Jewel Box in English, Finnish, Swedish, German and 30 other languages. 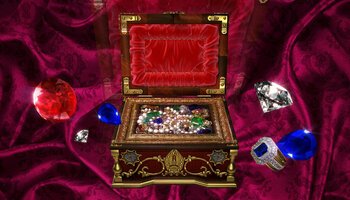