Jimi Hendrix, arguably one of the world’s greatest guitar heroes, has arrived at an online casino near you, in the shape of an online slot. The second NetEnt Rocks slot game instalment to emerge out of the prolific series, sees guitar God Jimi Hendrix take centre stage. Get ready to groove, thanks to the epic soundtrack as you spin the reels.

Performing his hit ‘Foxy Lady’, this slot game invites you on a psychedelic adventure, choc-a-block with features.

When this game initially came out, there was much anticipation. As you can imagine, software provider NetEnt effectively entered the music genre niche, wanting to deliver rock ‘n roll to the delight of rock fans. I love rock music, so when this game was released after ‘Guns ‘n Roses’, I knew too well that it would come with distinctive features.

Evoking tinges of nostalgia and the flower-power era, Jimi Hendrix, the slot game, time travels you to Woodstock, with Little Wing, Purple Haze and Crosstown Traffic as your background music.

Thanks to the hallucinogenic and flower-power theme, symbols include Peace signs, Hearts, Records and lots of flowers. Our main man Jimi Hendrix himself takes on a variety of roles in this game. For starters, he acts as a Wild to substitute for all other regular symbols in a bid to help you create winning combinations.

Additionally, he is also featured on the Purple Haze symbol, which activates the corresponding feature. Then there is Jimi dressed in white that acts as a Scatter and triggers the Pick and Click Feature, and there is also his image on a Coin for coin prizes.

His trusted guitar symbols are the highest-paying symbols in the game, while playing cards are the lowest-paying icons.

When it comes to gameplay, there is nothing that will actively surprise. You spin the reels until you hit one of the features. True to NetEnt’s style, Jimi’s official slot game boasts three different free spins rounds to activate:

Here, you’ll have to pick from a range of loudspeakers, each hiding one of four available symbols. Once you have collected three of a kind, you’ll win either a free spins round or a coin win.

Jimi Hendrix enjoys an RTP of 96.9%, and with medium volatility, this is a game that is popular for a number of reasons. I quite like it, thanks to the frequent wins, but what I find most exhilarating about this game, is the range of features.

I quite like Pick and Click games, which I find more thrilling than free spins rounds. That being said, there is more than enough here to define it as a solid game.

Just like Jimi Hendrix keeps us entertained for hours, thanks to his music legacy, this slot game keeps you spin happy as you bob along to Jimi’s music. This medium to high variance slot game gives you the opportunity to rock out and win out.

Jim Hendrix, the slot game is proof that with a chill backdrop, music from a legendary guitarist and alluring features can be music to your ears.

Browse casinos with Jimi Hendrix Online Slot and other slots from NetEnt. Create an account and try the game for free before making a deposit.

You can play Jimi Hendrix Online Slot in English, Finnish, Swedish, German and 20 other languages. 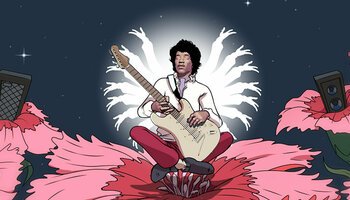